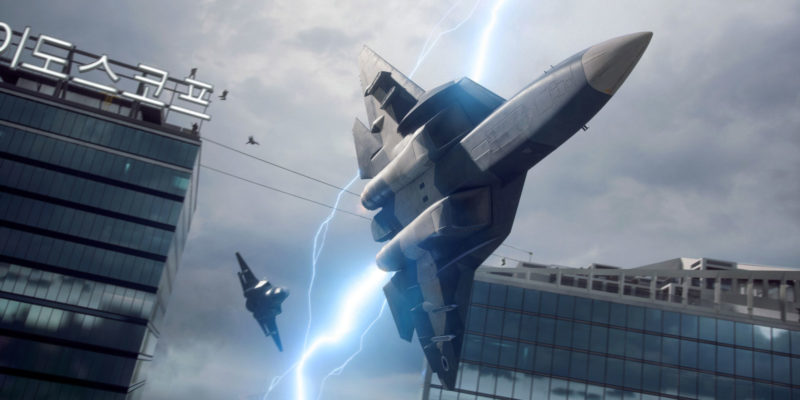 We finally got our first look at Battlefield 2042, and the folks at DICE nailed it. The Battlefield franchise is all about the ‘only in Battlefield’ moment. Today’s trailer is laser-focused on giving those to us. Drive an ATV into a helicopter? Check. Eject out of a jet to blow up a trailing plane with a rocket launcher? You’re damn right.

The in-engine trailer gives us a good idea of how Battlefield 2042 will look. Sure, the animations are much cleaner than the final game – but we’ve routinely seen DICE games look pretty damn close to this good. Anyone remember the Battlefront trailers?

The trailer teases some of the gameplay features coming to the next Battlefield. Destruction and the huge ‘levolution’ set pieces from Battlefield 4 are returning. We also get a glimpse of a huge tornado ripping through one map before a player deploys a wingsuit to get away from the vortex.

Battlefield 2042 launches on October 22, 2021. It will not have a single-player mode, instead focusing on multiplayer only. When the Steam page first went live, there was also mention of a level editor. Here’s a screenshot I took.

But now, there’s no mention of a level editor on the game’s Steam page. Today’s reveal does mention a third “game experience” that DICE says they will reveal during EA Play Live on July 22. Here’s how they describe it: “watch the reveal of this love letter to Battlefield fans and long-time players, developed by DICE LA.”

A level/map editor would certainly fit this description. Plus, it would make sense for such a big community tool to be developed by a separate DICE developer. We’ll have to wait for EA Play Live to see if that initial Steam page was an honest mistake or an early leak.

So, When Is That MG 82 Nerf Coming To Warzone? (UPDATE)

Battlefield 2042 Multiplayer Matches Will Always Be Full Thanks to Bots