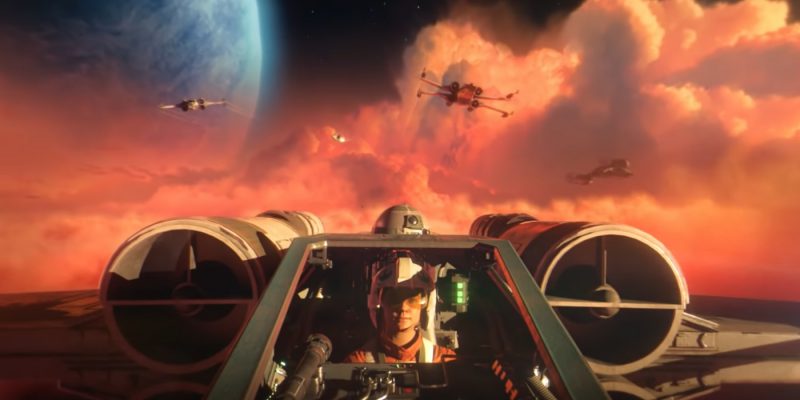 Here’s how EA describes the decision to go with first-person:

The cockpit is your home. Use its dashboards to your advantage and – with just a thin hull of metal and glass between you and the perils of space – feel the intensity of combat from a first-person perspective.

We see a glimpse of this in the trailer when the New Republic pilot diverts power to engines.

There appear to be three gauges, which we can assume are engines, shields, and weapons.

The gameplay is described as “strategic space dogfights,” as you divert power between your spacecraft’s systems. All I have to say is sign me the hell up right now.

While Star Wars Jedi Fallen Order used Unreal Engine, Frostbite returns in Star Wars Squadrons. Today’s trailer is dubbed as in-engine (there’s a disclaimer at the end of the trailer), but what we see today is almost sure to be what we get when we are playing it. I learned to stop doubting the power of Frostbite after the in-engine reveal trailer for the first Battlefront back in 2015.

As for a proper gameplay reveal? That’s coming during EA’s conference on Thursday.

Here’s what we do know about Star Wars Squadron:

– Single-player story along with multiplayer modes including cross-play support across all platforms.

– VR support for the entire game on PC and PS4.