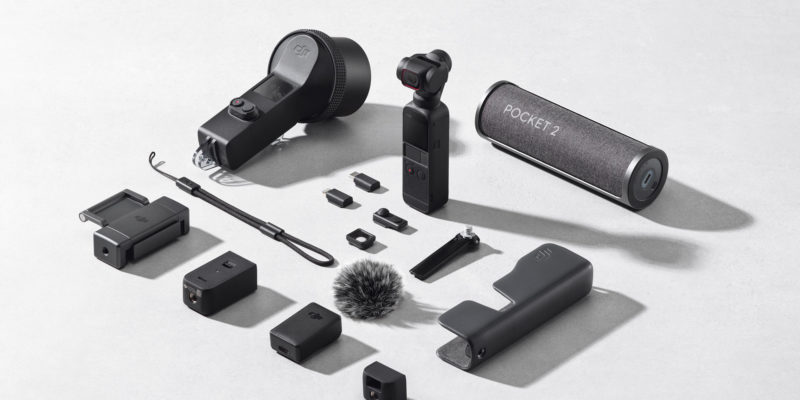 This one wasn’t a shocker. The FCC database has become quite the place for leaks on upcoming products. The DJI Pocket 2 is no exception, and now it’s official. And good news. Tons of upgrades with no price increase. It starts at $349 for the base model and hits $499 for the Creator Combo.

I’m generally of the mind to avoid combo packs, but you may want to look long and hard at the Creator Combo. Piecing together the parts you’d want will easily eclipse the $499 price tag.

Let’s get the standard marketing video out of the way.

The main feature will be the larger sensor. It sports the new Sony IMX686, which sizes in at 1/1.7-inch. Yeah, the rumors of the Mavic Air 2 sensor making its way into the Pocket 2 were wrong. Maybe next time. The new sensor does allow for 64MP photos thanks to pixel binning and the Quad-Bayer technology. Expect incredible panoramas.

Video features have seen a modest uplift, with 240p actually being usable with only a 19% crop. The original DJI Pocket was essentially a toaster when it came to slow motion, with it nearly unusable except in the most niche conditions.

Other video specs remain the same, with DJI Pocket 2 topping out at 4K60. It fits in your pocket. 4K120p would melt the thing.

HDR video also appears on DJI Pocket 2, along with what the company is calling an AI editor baked inside the MIMO app.

The lens gets a faster aperture at f/2.0 and a 20mm focal length outside of the video specs. The FOV stretches well past the original Pocket up to 93-degrees. 20mm is almost the sweet spot for vlogging, and the Creator Combo gets you there with the included wide-angle lens attachment.

Audio. The big improvement on the DJI Pocket has to be the audio. 4 stereo mics have been added, and while that equals a massive improvement, it’s the DJI wireless microphone transmitter that steals the show. It looks damn close to a RODE Go, and you can hook a lav mic up to it if you don’t want to have a box clipped to your shirt collar.

You will need the DJI Pocket 2 Do-It-All handle for it to work, but that comes with the Creator Combo.

I’d love to see drone controllers incorporating this feature in the future. DJI has something here and should capitalize on it.

DJI Pocket 2 Improvements to Watch For

Most reviewers are stuck with pre-production firmware, so you’ll notice some issues with the autofocus. DJI has already promised fixes in the firmware to get rid of the hunting. It’s nothing major, but definitely something that needs to be tweaked.

Other areas DJI could see if they could get more out of the Pocket 2 lie in the video settings. Some of the features are nerfed as you step up higher in resolution, like the zoom functionality and others. That could be processor related, but the company is known to pull some software magic, so here’s hoping.

Right now. I suspect supplies will be limited, so if you’re in the market, I’d jump over the Creator Combo. It’s the actual value in this situation.

As for what’s next for DJI, I’d expect a bit of lull until the new year. Maybe an FPV drone, but the company may take a wait and see approach as we are almost certainly heading into a massive second wave of Covid-19.