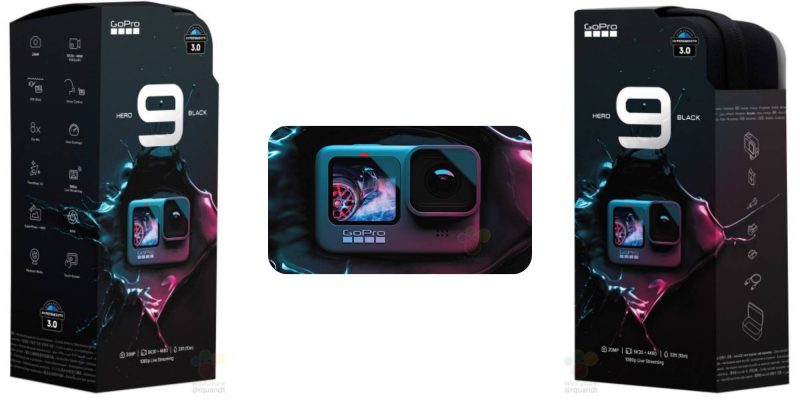 It’s not exactly a surprise if you follow GoPro’s earnings reports, but we will not leave 2020 without the GoPro Hero 9 Black. And it contains quite a few upgrades over the Hero 8. Maybe new Media Mods? Doubtful considering how long the mods took to arrive for the Hero 8.

New leaks for the packaging and features have hit the web, and it’s clear GoPro wants to move past the action camera niche. The headline feature has to be the 20MP sensor, which screams the sensor itself could be increasing in size to a half-inch. If it doesn’t, the increase from 12MP to 20MP over the same area will kill lowlight functionality.

Outside of the new sensor will be the color front-facing screen, which looks to borrow heavily from the DJI Osmo Action. There are three reasons for this addition.

First, the Osmo Action. It needs to compete. Second, expect a heavy dose of marketing towards vloggers. Every other camera company has done it in 2020, so go for it, GoPro. And third, the new webcam option. You will be able to livestream in 1080p out of the box.

The Hero 8 introduced us to 4K60p, and the Hero 9 is expected to make use of the 20MP sensor for 5K30p filming. Not bad for a camera that fits in your pocket and can take a beating.

Stabilization is getting an upgrade to HyperSmooth 3.0. I’m not sure how much smoother they can make the footage, but damn electronic image stabilization has come a long way from the old GoPro shake.

TimeWarp is joining its HyperSmooth sibling with a 3.0 upgrade, along with slow-motion hitting 8x. I doubt these will have 5K capability, but consider me intrigued if the 4K isn’t cropped when entering HyperSmooth 3.0.

Leaks are pointing towards a 40% bigger battery with the new GoPro Hero 9 hitting 1720mAh. How that translates into battery life is an unknown, and I doubt any marked increase due to the 5K video functionality and larger sensor. I’d expect Hero 8 battery life with better features.

It’s not often the packaging of a product earns a marketing nod, but the Hero 9 Black is proving to be an exception to that rule. Leaked images point to a hard case being part of the packaging to store Hero 9 and its accessories. Could the days of the excess paper and adult-proof plastic be gone? Here’s hoping.

We have a pretty good idea of what the GoPro Hero 9 will look like and the functionality. What about price? If you head over to GoPro’s official website, you can see the Hero 8 is enjoying a $100 price cut. Expect the Hero 9 Black bundle to slide in at $449.

A release date should occur within the next month. A company doesn’t slash prices that much without a clear nod towards launching a new product.

When GoPro does launch the Hero 9 Black, expect DJI to respond in kind with the Osmo Action 2. You can already see the company mimicking similar specs when it comes to the sensor. Take a look at the Mavic Air 2. It already has the 20MP, half-inch sensor. Pull it off the drone and slap it into the Osmo Action. And the Osmo Pocket. The company already has the sensor tech, and both products are in line for a refresh.

The release of the GoPro Hero 9 will be a boon for GoPro as it looks to take advantage of the work-from-home trend thanks to the pandemic. Sure, we aren’t traveling, but the 1080p livestream capability out of the box isn’t an accident. GoPro knows the webcam market is garbage, and they are sitting on a potential goldmine as workers rush to get better quality and durability.