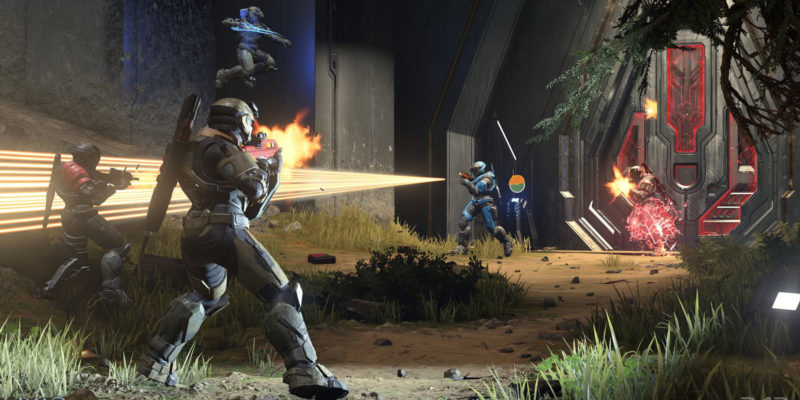 12/11 UPDATE: The following playlists are coming in an update on December 14: Slayer, Fiesta, FFA, and Tactical Slayer (SWAT).

12/3 UPDATE: A dedicated SWAT playlist is coming before the end of the year. The news comes from 343’s Community Manager.

A social slayer playlist is also in the works and will come after the holidays.

Halo Infinite’s launch couldn’t have gone better. Steam logged 200,000+ concurrent players alone, and I imagine the numbers were even higher on the Xbox side of things. And with the servers taking the beating like a champ, we all move on to complaining about other things. The glacial leveling pace of the Battle Pass has received the most ire, but I want my SWAT playlist, dammit.

Probably in a bid to keep servers stable, 343 Industries opted to launch Halo Infinite with only a handful of playlists: Bots, Quickplay, Big Team Battle, and Arena (ranked). No SWAT. No Snipers. And hell, no Slayer most of the time. Sorry 343, objective game modes aren’t consistently fun. It relies too much on that elusive ‘teamwork’ mechanic. It can be a blast with friends. But random strangers? Hmm, not so much.

343 Industries did acknowledge they are keeping Halo Infinite’s launch playlists “fairly simple – start with a focused offering to ensure healthy matchmaking and be prepared to adjust as needed.”

They also mention they will be tracking data and player feedback to “identify opportunities to add or remove playlists (or even certain map and mode pairings within a playlist.”

We know it’s not a player base issue. Halo Infinite is, or shortly, will be more popular than Forza Horizon 5. And Playground Games’ fantastic racer managed to knock Call of Duty: Warzone off the top of the most played Xbox games chart.

So, which playlists should Halo Infinite add right now?

1. Slayer. Yeah, I know I mentioned SWAT – but a dedicated Slayer playlist is a must. Developers can push objective modes all they want, but folks are always going to gravitate towards deathmatch (or in this case, Slayer) type modes. Slayer keeps it simple. Kill the other team until the score is reached.

2. SWAT. I love the longer-paced fights of traditional Halo, but pulling off a slick overkill in a matter of two seconds feels pretty damn good too. Now that Halo Infinite is free to play, a lot more folks will be checking it out. And many of them are going to be coming from games where the TTK (time to kill) is much shorter. SWAT is perfect because it’s a fan favorite, and it could be an excellent first step for folks who prefer shorter fights.

3. Objective. Take all those objective modes, and toss them into their own playlist.

This would be a good first start. Then, there’s Snipers, Action Sack, Infection, FFA, etc. 343 Industries should add a few extras and then start experimenting with more modes during the weekends. Toss in some 2XP Battle Pass for these modes too to get folks playing them.

Halo Infinite is in a great spot. You can tell because we’re all complaining about stuff not directly tied to gameplay, graphics, or server stability. But these are still issues that need to be addressed. The Battle Pass desperately needs a better XP system not explicitly tied to challenges. And the community needs more playlist options.