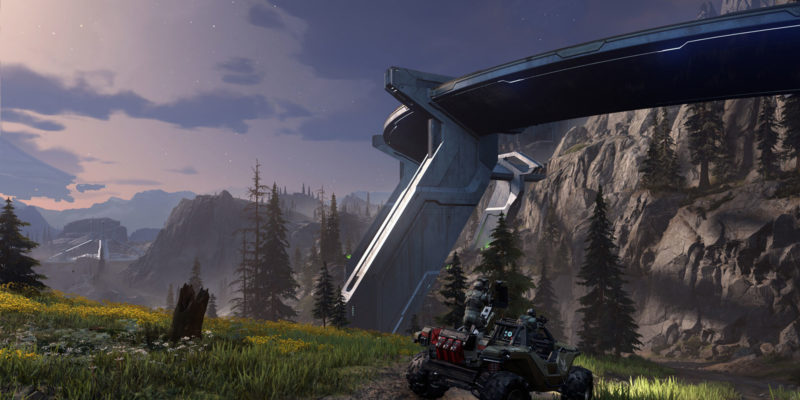 Halo Infinite’s open-world promises to be more expansive than previous Halo games, but it’s also no Assassin’s Creed. That’s according to IGN’s Miranda Sanchez, who spent four hours strolling around the Zeta Halo ring. Her full preview is well worth a read and includes more about combat and the story.

In the preview, Miranda describes the Halo Infinite’s open-world as seeming “to offer something more curated with excellent combat at its heart.” The short snippets of the map don’t show us drowning in objectives like a Ubisoft game. Instead, we see Forward Operating Bases once occupied by UNSC forces – but have now fallen to the Banished.

Clearing these bases converts them to instant fast-travel points and nets you Valor. What’s Valor? It helps you keep track of how much of Zeta Halo is under UNSC control. And we can use it to spawn in weapons, vehicles, and Marines based on how much you’ve earned. The more bases you clear, the better weapons and gear you can call in. IGN’s preview does suggest clearing out these bases is entirely optional.

“If I wanted to instead get on with the main campaign quests I could have left them with the Banished and suffered no repercussions. But what kind of Master Chief would I be if I did that? These sorts of encounters were abundant, but not overwhelming. I was more likely to come across a random patrol of enemies than an actual objective, but I didn’t feel like I had to go too far to find something to do.”

The IGN preview also mentions more robust challenges like large Banished facilities and special Banished targets “that, once slain, reward you with a unique version of their signature weapon that you can equip at FOBs.”

And it wouldn’t be an open-world game without collectibles to hunt down. Audio logs, multiplayer armor, and Skulls are littered across Zeta Halo. A new scanner tool should make them easier to find. But this scanner does have a limited range, so we should still have a little hunting to do.

It sounds like 343 Industries is striking a good balance between having a more open-world without falling into the pitfalls of the genre’s design. Mainly, way too much meaningless content. We’ll see what the final product looks like, but this doesn’t look like overkill at all.

GameInformer’s preview also touched on how all the open-world elements mesh together.

“Whether it’s increased requisitions from your controlled FOBs, special weapons acquired through the defeat of high-value targets, or improved equipment from the Spartan Cores you’ve uncovered, your development of Master Chief’s options and power all feeds into increased options for the big fights you’ll have to confront. Beyond the activities already described, Halo Infinite also features numerous larger bases, some of which are mission-critical, and others of which you can optionally choose to try and conquer.”

While GameInformer acknowledged how 343 Industries is trying new things, they also touched on how the combat pacing reminded them of the earliest Halo games.

“The flow of individual exchanges with the Banished enemies has that distinct “feel” of Halo encounters I remember facing in the early 2000s.”

After playing Halo Infinite’s multiplayer tests, Halo’s multiplayer is back as far as I’m concerned. Now we wait to see if we can say the same for the story. The more I hear about a ‘curated’ open-world, the more excited I get. It’s just a shame co-op won’t be there at launch.

We’ll see if Master Chief’s adventure on Zeta Halo all comes together on December 8.