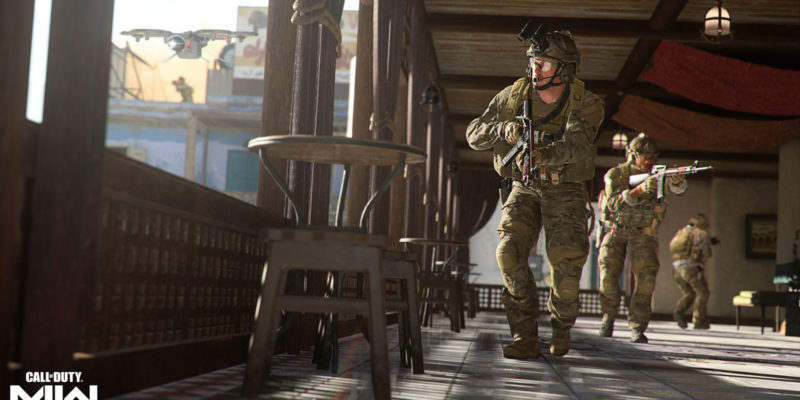 Folks who pre-ordered the PlayStation version of Modern Warfare 2 got their first hands-on with the multiplayer over the weekend. Long-time fans instantly recognized the change to the mini-map that developer Infinity Ward first adopted in 2019’s Modern Warfare reboot.

Traditionally, red dots would ping the mini-map when players fired their weapons. Modern Warfare 2 is taking the same approach as 2019’s Modern Warfare; the red dots now appear on the compass at the top of the screen versus the mini-map.

Why are the devs so adamant about this change? They explained the design philosophy in a community update for the first beta weekend.

“The design reason for this is that we do not want to punish players for firing their weapons. We also want players to actively search out the origin of a gunshot versus just traveling directly to where the dot is on the mini-map. We continue to gather feedback on how the game is playing in regards to this topic.”

I get the reason, but I’m still not a fan of the change. Now, we have to look at the mini-map to help get our bearings while double-checking the compass for any red dots. What ends up happening is we ignore the compass unless we’re playing Warzone.

If Infinity Ward is dead set on not having precise red dots on the mini-map, maybe they could shoot for a middle-ground with a broader red area representing gunfire on the map.

What is interesting, though, is the traditional Call of Duty map mini-map is reportedly already in the game. A Twitter user shows an option on the local multiplayer side for Xbox with a “weapon pings on minimap” option.

So it’s not a question of whether the team has time to add it before launch. It’s there; it’s just a design decision by Infinity Ward.

The question is, will Infinity Ward budge on it? I’m leaning towards no. They didn’t revert the change in 2019’s Modern Warfare. I doubt they do it here. Not unless there’s a whole hell of a lot of community pushback on it. The big tell will be their response to the second weekend’s beta when it opens to all platforms.