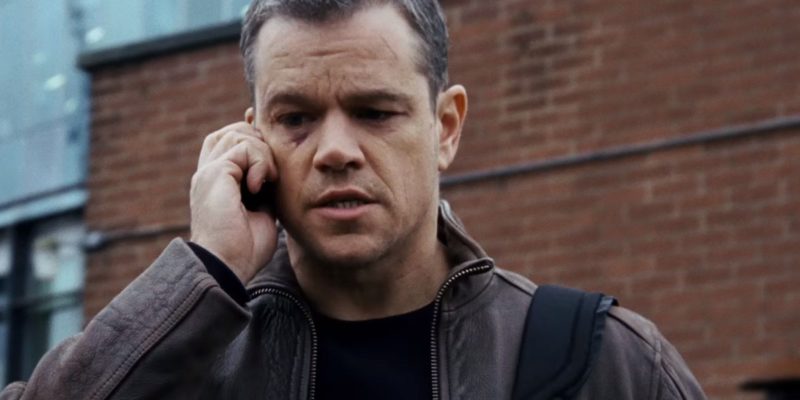 Prepare to feel old because the first entry in the Jason Bourne franchise is 20 years old this year. The first movie introduced us to Matt Damon’s Jason Bourne and ushered in the era of the shaky cam for action scenes. It also gave us the ubiquitous meme:

The film series follows Damon’s character for the most part as he uncovers a secret CIA assassination program he was a part of but is now being hunted as he attempts to expose and shut the program down. Outside of the film series, there was a single-season spin-off show called Treadstone that never connected with audiences.

Our first look at Damon’s Bourne is as he’s being fished out of the sea with two gunshots. With no memory of what happened or who he is, the Italian fisherman who saved him tends to his wounds and takes him back to shore. They find a small chip in his hip that displays a numbered bank account for a bank in Zurich. When Bourne travels to the bank, he discovers a safety deposit box filled with cash, passports, and a handgun. The bank alerts Operation Treadstone, a CIA black ops program that alerts three Treadstone operatives to kill Bourne.

Damon’s character evades the Swiss police by using an American passport with the name Jason Bourne to enter a US consulate, where he evades capture by US Marine guards. He gives Marie Kreutz (Franka Potente) $20,000 to drive him to a Paris address outside the consulate. He begins to piece together what happened that landed him in the Mediterranean Sea with two gunshot wounds. A Treadstone assassin attacks both Bourne and Kreutz at the apartment before escaping.

After uncovering the plot to assassinate an African leader, Wombosi, he eventually makes his way to a Treadstone safe house, where he holds Conklin and Nicky Parson hostage. Telling them he is resigning from Treadstone, he fights his way out of the safehouse, warning them not to follow him as he reunites with Kreutz, who is renting scooters on the island of Mykonos.

Impact on Bourne Franchise: The success of the Bourne Identity at the box office leads to a direct sequel that picks up on events right after the film’s conclusion.

A direct sequel to The Bourne Identity, Bourne Supremacy picks up Matt Damon’s Bourne living in Goa, India, with Kreutz from the first film. While living there, he has been piecing together his former life by writing down memories that occur in flashbacks.

The plot of the movie follows CIA Deputy Director Pamela Landy as she attempts to recover the Neski files in which a CIA agent is named in the theft of $20 million. During an operation, a Russian FSB Agent, Kirill (Karl Urban), ambushes the deal and plants evidence pointing to Bourne. He then travels to Goa to kill Bourne but hits and kills Kreutz. Bourne immediately jumps to the conclusion it’s his past with Treadstone and the CIA catching up with him and travels to Munich, giving us this iconic scene:

Bourne kidnaps Nicky but later spares her after learning she has nothing to do with the plot in Berlin. He travels to Moscow, where he gets into a running shootout with Kiril, seriously wounding him. Bourne locates Irena, where he apologizes for killing her parents during the Treadstone mission, and the film concludes with a call back to the Munich scene in which Bourne learns his true identity, David Webb.

Impact on the Bourne Franchise: We learn Jason Bourne’s identity and just how deep the Treadstone operation went and continues under a new guise. The action’ shaky cam’ is cemented in Hollywood as numerous films begin to employ the technique for frenetic action.

Bourne Ultimatum is a direct sequel to Supremacy which follows Jason Bourne/ David Webb as he has more flashbacks to his past as a Treadstone imperative and when he first joined the program. The film gives one of the more thrilling action sequences as Bourne works with a reporter to avoid capture at London’s Waterloo Station. It’s the culmination of this scene that gave rise to the meme ‘Jesus Christ, that’s Jason Bourne.’

It’s actually my second favorite scene of the film, with the fight in Tangier topping my list. The shaky cam is still here, but the action is intense and beats John Wick by over a decade on using a book to get rid of an adversary.

After the fight, Bourne uncovers a deep-cover CIA site in New York, where he gets in touch with Pamela Landy again. She tells him his name again and his supposed birthday – 4-15-71. This turns out to be the site’s address where Treadstone was formed. He learns he was forced to volunteer for the program while Landy exposes Operation Blackbriar to the world.

Bourne appears to be shot when he falls into the East River, but days later, Nicky Parsons watches a broadcast on the revelations of Operation Blackbriar and that David Webb’s body still has not been found. The movie cuts to Bourne/Webb swimming away from his fall.

Impact on the Bourne Franchise: Easily the most successful of the three films so far, it puts a neat bow on the trilogy so far by revealing Bourne’s journey through the Treadstone program. But when a film makes north of $400 million, Hollywood will not let the franchise rest.

A Bourne movie without Matt Damon? That was Universal Pictures’ idea when it decided to greenlight the fourth film in the franchise without the titular character. Instead of Jason Bourne, the film centers on Aaron Cross (Jeremy Renner), a member of Operation Outcome, a collection of operatives who have their mental and physical abilities enhanced by a cocktail of drugs dubbed ‘chems.’ With Treadstone and Blackbriar being outed to the public, the decision was made to erase evidence which included killing the operatives.

Cross saves the life of Dr. Marta Sheating, one of the researchers who worked on the drugs, and they escape assassins sent to kill them. They eventually make their way to Manilla to inject him with a virus to make the cognitive and physical enhancements permanent.

A fight breaks out, and the pair eventually escape by sea. The film ends with Blackbriar’s supervisor lying to Congress, saying the program was only developed to hunt Jason Bourne and Pamela Landy had been committing treason by selling classified secrets.

Impact on the Bourne Franchise: Outside of introducing more super soldiers, the film is unnecessary to follow the story of Jason Bourne/ David Webb. He was not a part of Operation Outcome and is only tangentially mentioned to tie the film into the broader franchise.

Bourne returns for the fifth and final film in the franchise. We see a 12-year time skip which finds Matt Damon’s Bourne living life by taking part in bare-knuckled fights in Greece. Meanwhile, Nicky Parsons has joined a hacker collective to expose black-ops programs such as Treadstone and Blackbriar.

She uncovers information about Bourne’s recruitment into Treadstone and his father’s role in creating the program. Wishing to inform him, she travels to Greece and uses the cover of protests to meet, but she is killed by the Asset, an ex-Blackbriar operative who holds a personal grudge against Bourne.

The CIA again tries to bring Bourne back into the fold by offering to bring him in but traps him by sending the Asset to kill him. Bourne escapes but learns that his father created the program and wanted to recruit him. During the conversation, he learns the Asset killed his father in Beirut but staged it to make it look like a terror attack to encourage Bourne to volunteer.

Overall, the motives of the antagonists are to deploy ‘Deep Dream’ as a mass surveillance tool disguised as a social media platform. It would be used to supply the datastreams to ‘Iron Hand,’ a CIA assassination program that had replaced Treadstone and Blackbriar. Lee supplants Dewey as the head of the CIA, and she tries to bring Bourne in, promising him the CIA would become the organization he thought it should be. He walks away, leaving her with a recording exposing her intentions of killing him.

Impact on the Bourne Franchise: It’s been debated if the movie was needed as the Bourne Ultimatum tied up the story, but the introduction of new characters opened up the possibility for a second trilogy of films that have never been acted upon.

With the success of the Bourne franchise, it was only a matter of time before it made the spin-off leap to the small screen. In 2019, Treadstone premiered on USA. Unfortunately, it quickly lost steam after the pilot, with the series canceled after one season. If you want to finish everything Bourne, it’s worth a watch just for the Treadstone lore. It doesn’t add much to Bourne’s story, but it fills in the universe in which the movies operated.

WIll there be a sixth Bourne film?

As of 2022, there has been zero news on a possible sixth film, with both Paul Greengrass and Matt Damon expressing no desire to return to the character.