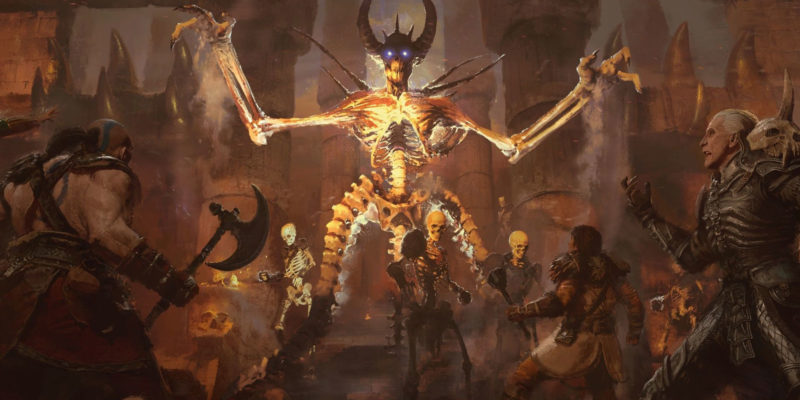 Diablo 2 Resurrected is Diablo 2. The classic from over two decades ago returns with a stunning coat of fresh paint courtesy of the folks at Blizzard North (formerly Vicarious Visions). I spent Sunday bashing, burning, and ripping through hordes of monsters and undead.

Diablo 2 Resurrected is a visually stunning remaster of Diablo 2. But it’s still Diablo 2, for better and worse. Game design has come a long way in 20 years. If you can handle some clunkiness here and there, this all-time classic still holds up. And no other Diablo can hold a candle to it visually anymore.

This is the classic that helped shape many loot games we enjoy today. From Borderlands and Destiny to Path of Exile and Grim Dawn and plenty more. And while the visuals are breathtaking, we can also clearly see how two decades of game design since helped shape the genre for the better.

You can’t talk about Diablo 2 Resurrected without talking about how damn good it looks. The dark shroud that surrounds you is perfectly recreated and paired with impressive lighting.

Fireballs roar into the darkness as they seek out a shuffling zombie.

A quick button press reminds us just how far graphics have come in two decades. Pixelated blobs become intricate models. A simple water texture morphs into a river with wisps of fog rising from its surface.

A muddy smear transitions into a reflecting puddle. A silly looking werewolf becomes a menacing beast.

The visual team at Blizzard North knocked it out of the park here. It stands in stark contrast to the more vibrant color palette Blizzard went with in Diablo 3. The darker mood of Diablo 2 works better, and Blizzard agrees as Diablo 4 is set to riff off Diablo 2’s darker style.

We also have to give props to Matt Uelmen’s outstanding score. Words don’t do it justice. Here’s a taste.

Switching between the old graphics shows how Diablo 2 Resurrected really is built right on top of Diablo 2. That also means all the game design from two decades ago.

The first ten levels aren’t the easy trek like they are in Diablo 3. It’s not hard either, but you can’t just wade into a dozen enemies and come out unscathed as you could in Diablo 3. The old-school design gives a better curve of starting out as a weaker character before becoming a badass. Whereas Diablo 3 just made you a badass from go and made you even stronger as you went.

I like the slower pace. It also helps when the game looks as good as it does. Plus, I started to fall into a rhythm around level 10 once I started leveling up skills a few times. I noticed stacking skill points into one skill at first was the way to go. Better to have one skill that hits hard versus five that don’t do much.

But such a faithful remaster also means parts of the game show its age. Hit feedback felt clumsy sometimes. A swing of a club might not register immediately, or a fireball aimed at a zombie still hits them even when it appears they moved out of the way. Nothing game-breaking, but it’s noticeable on faster enemies.

Potion management is also a pain in the ass (at least on console). There’s an auto-equip functionality here, but it doesn’t always kick in. I ended up pausing for a second before big fights to make sure all my potions were set in my belt. Oh, and each potion takes up a slot in your inventory. New loot games like Diablo 3 and Path of Exile have moved to more streamlined systems with rechargeable potions.

Inventory management also shows its age. Instead of tossing 60 items in your imaginary backpack like in Diablo 3, we get a grid system. The bigger the weapon/armor, the more space it takes up. Add in the usual half dozen or more spare potions, and your inventory fills up in a hurry. Again, it’s not terrible – but it’s another example of how older game design could be a bit unwieldy compared to today.

Blizzard North is implementing several quality of life changes with Diablo 2 Resurrected like shared item stashes. It would have been nice to see these changes extend a little further into the gameplay.

There’s also the lack of local co-op. It’s not a deal-breaker for most, but it is a bummer when I can’t play together with my brother and nephew without everyone having an Xbox.

This past weekend’s beta was all about showing off how good Diablo 2 looks now while introducing it to millions of new Diablo fans who never played the classic. And eased concerns of long-time fans who were feeling hesitant after the Warcraft III: Reforged debacle.

Diablo 2 Resurrected is a beautiful remake of Diablo 2. If visuals were holding you back from visiting or revisiting the classic, scratch that excuse off the list. But also realize this is still the game from 20+ years ago. That means game design from then. There are going to be parts that feel clunky as hell. But this all-time classic holds up. And now, it’s the best-looking Diablo game out there.