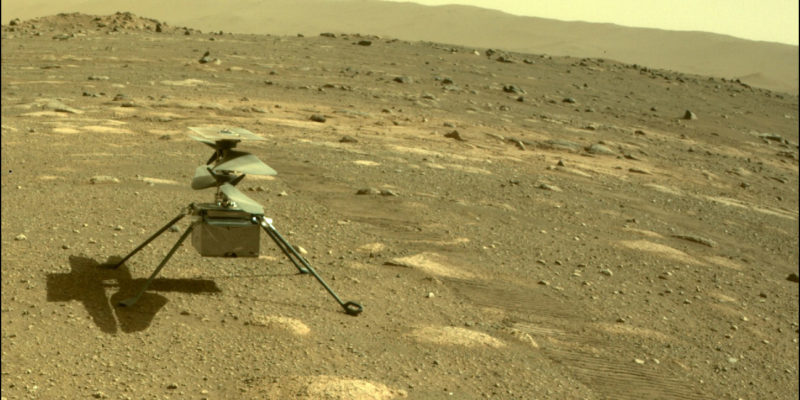 It might not sound like much, but it’s a huge milestone for the helicopter eventually getting its four tiny legs off the Martian surface. Temperatures at the Jezero Crater (where NASA’s Perseverance and its little helicopter companion landed) regularly hit a bone-chilling minus 130 degrees Fahrenheit (minus 90 degrees Celsius).

Any electronics left unprotected can freeze and crack under those extreme temperatures.

“This is the first time that Ingenuity has been on its own on the surface of Mars,” said MiMi Aung, Ingenuity project manager at NASA’s Jet Propulsion Laboratory in Southern California. “But we now have confirmation that we have the right insulation, the right heaters, and enough energy in its battery to survive the cold night, which is a big win for the team. We’re excited to continue to prepare Ingenuity for its first flight test.”

For the past month and a half, Ingenuity has been receiving its power from Perseverance. Now, the team knows its solar array provides enough power to the heaters to get the helicopter through Mars’ chilly nights.

Ingenuity won’t be conducting any science experiments on the red planet’s surface. This part of the mission is all about figuring out if it’s possible to have a powered, controlled flight on another planet. If successful, the demonstration could eventually change how science is conducted on Mars and perhaps the surface of other worlds. Imagine how much more scientists could learn with drones flying above the surface of Mars or Saturn’s moons like Titan and Enceladus.

We’re still a long way off from that, but it can’t happen without missions like Ingenuity.

So, what’s next for the helicopter?

Ingenuity will spend the next two days keeping an eye on its internal systems and ensuring the heater and power systems are in the green. The team back home on Earth will use this information to make any adjustments needed to help the helicopter make its way through Mars’ nights over the next month or so.

On Wednesday (April 7), the restraints holding the rotor blades together since it was packed onto the rover back here on Earth will be released. You can see how the blades are stacked atop each other in the image above. If the release goes smoothly, the following days will be spent testing the rotor blades, motors, and onboard computers. And if everything goes off without a hitch, the Ingenuity team will attempt its first lift-off on April 11. That’s the earliest it will happen, so don’t be surprised if it slips a day or two.

Ultimately, the team plans a series of flights with Perseverance parked nearby to capture the historic flight test with its cameras. Once the flight tests wrap up, Perseverance will kick off its part of the mission as it hunts for ancient life signs on Mars. NASA expects the Perseverance mission to last at least one Mars year (about 687 Earth days).

Mars Is Getting Three New Visitors In 2021