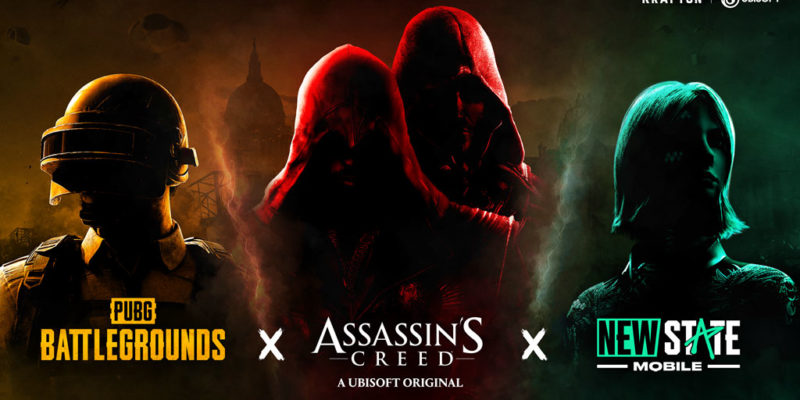 PUBG isn’t one to shy away from collaborations, but I wasn’t expecting the folks at Krafton to team up with Ubisoft and Assassin’s Creed. This week, the company behind PUBG announced a multi-game collaboration that will bring the world of Assassin’s Creed to PUBG and New State Mobile in August.

What exactly does this collaboration include? The usual cosmetics we often see in these types of deals with PUBG getting a pair of costume sets, bag skins, parachute skin, emote, gun charm, and two spray items.

But the team-up with Assassin’s Creed doesn’t stop there. When Haven gets re-added to the map rotation, it’ll include some Assassin’s Creed themed makeovers. Krafton doesn’t dive into all of them, but it will include at least one of the map’s main buildings, including a few ‘Leap of Faith’ ledges on the building’s rooftop.

“For a limited time during the Assassin’s Creed collaboration, players will be able to discover a variety of themed resources and props on the Haven map. Abstergo Industries has taken over one of the map’s main buildings, complete with a hidden Animus machine and strategically placed “Leap of Faith” ledges on the building’s rooftop.”

PUBG’s next update is expected in August with patch 19.1. This will include a new map service update. Here’s how that will look:

Unfortunately, that means Deston’s featured playlist will be going away. But the PUBG devs know the map has been a hit, and Deston will pop up more often in the regular playlist. According to PUBG’s Associate Community Manager, Deston’s pick ratio will be 40%, while other maps sit at 15%.

That’s all we know about patch 19.1 so far. Don’t expect anything too crazy since we just got a new map, vehicles, and a new weapon.