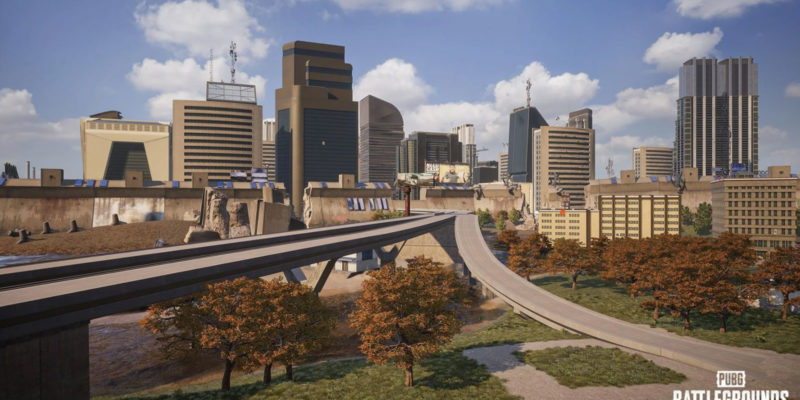 This morning, the folks behind PUBG dropped a new roadmap covering the rest of 2022. Today’s updated roadmap gives us a release window for the next map, codenamed Kiki, and our first in-game screenshots of it.

Kiki is coming in Quarter 3, which falls between July and September. Still not a specific date, but at least now we have a release window. PUBG’s development team has always described Kiki as having a “diverse set of locations.” Three new screenshots show this off. Since it was first announced, I wanted to see how a big city would work in PUBG. One screenshot teases that it is indeed a big city.

Unfortunately, we won’t be exploring every corner of every building. The devs are taking a similar approach with Kiki as they did with Haven.

“Taking lessons from Haven, not every building is fully playable, with single floors, or sometimes just single chambers, open for gameplay and highlighted so that players on the ground can easily learn where snipers can fight from,” the devs write.

Here are a couple of more images of Kiki.

Those two have a Miramar / Taego feel to them.

While we’ll have to wait a bit longer for Kiki, the dev team have a few things cooking for April – June. A rolled-back Sanhok is “in the last stage of stabilization and will be revealed in the near future.” Most in the community preferred the old Sanhok, so the PUBG team is changing it back.

A new 7.62mm Assualt Rifle is also on the way to add a little variety to the AKM and Beryl. It’ll be sandwiched in between the AKM (easy to control, low damage) and the Beryl (harder to control, high damage). Look for it to thread the needle in between them. Easter to control than the Beryl, but stronger than the AKM.

Tweaks to the Paramo map (the smaller map featuring a Volcano) are also coming in the next couple of months. It looks like it will be mostly balancing tweaks focused on the map’s terrain.

Check out the full post for more on changes coming to Arcade Mode, Weapon Mastery, and more.