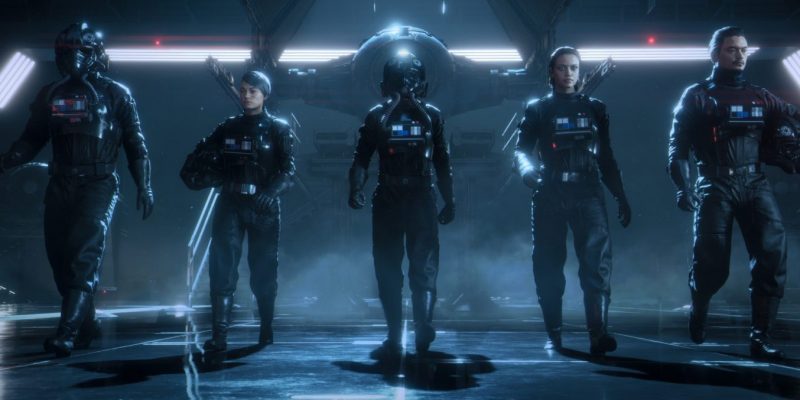 Star Wars Squadrons is a hell of a lot of fun to play, and it gets even more so once you get a handle on the controls and systems at play. Here are a handful of tips that’ll give you an early edge in dogfights. Most of these are going to involve a deep dive into the control options.

How to make drifting easier.

The tutorial shows you how to do it, but I couldn’t get it to work consistently until I changed how throttle works while boosting.

Head into Options, then Controls. Once here, you want to switch off the ‘Throttle Down to Stop Boosting’ option. That way, you don’t accidentally stop boosting when you’re trying to drift. Remember, to drift – you have to be boosting. Keep an eye on your boost meter.

Also, I recommend keeping the button press as ‘hold’ and not a double-press.

Toggle full engines or shields at the start of the match.

Your starfighter’s power systems are at the core of Star Wars Squadron’s gameplay. Eventually, you want to be tweaking them throughout the match. But an easy way to get a leg up on the other team is to switch power to all shields or engines at the start.

Doing this to shields will max them out after a short period. You’ll see this happen as the green highlight of the shields turns white. Once the shields are white, you can rebalance power and keep that extra bit of shields. It makes surviving that opening game of chicken a little easier.

The same goes for engines. At full engine power, you’ll start filling up the boost meter. This also fills up after a short while but does slowly go away once power is shifted elsewhere. Still, it’s slow enough to give you plenty to use drift and boost.

I usually go full shields at the start of the match, then go with full engines, especially during attack runs on an enemy Capital Ship in Fleet Battles.

In Squadrons, your starfighter becomes the most maneuverable when at half speed. There are audio and visual cues, but those get drowned out when you’re chasing a TIE Fighter around an asteroid. Instead, head back in the Options, go to Controls, and switch the Throttle Input Mode to Steps and the increment to 25% or 50%. I like 25% to have a little more fine-tuning on the throttle. Two quick flicks downward, and I know I’m at half speed with maximum maneuverability.

This is probably the first option you’ll change yourself, but if you haven’t yet – it’s a good idea to go ahead and change it. Instead of going full power on any one system, you can split power evenly between shields and engines, or any other combo. I usually toss a little extra into weapons at the start of each match.

Use the targeting wheel to figure out what parts of the Capital Ships to hit.

If you’re struggling on exactly which part of the Star Destroyer or Republic Cruiser to hit, bring up the targeting wheel (hold ‘L’ trigger on the controller) and select ‘Capital Ship Systems.’ This will show you precisely what part of the ship to hit. You can also use this option to choose only the enemy squadron if you don’t want to be bothered by the AI ships.

Switch to ‘Aviator’ controls on the controller if you’re struggling with Yaw and Roll.

This was the first thing I did after the tutorial. It just doesn’t feel right to have roll and pitch on separate thumbsticks. If you can’t seem to get a handle on your starfighter at first, try changing the thumbstick layout and see if it helps any. (UPDATE: A quick note on ‘Aviator’ controls. There’s currently an input bug when moving the right thumbstick diagonally. Rolling and pitching at the same time causes input to decrease significantly resulting in slower turns)

It’s still early days for Squadrons, so who knows how the gameplay meta will shake out. Thankfully, the developers opted to balance all the different upgrades to starfighters. It’s not a Battlefront 2 situation where you only become stronger the more you play.

I’ll keep this article updated with more tips as I play more.