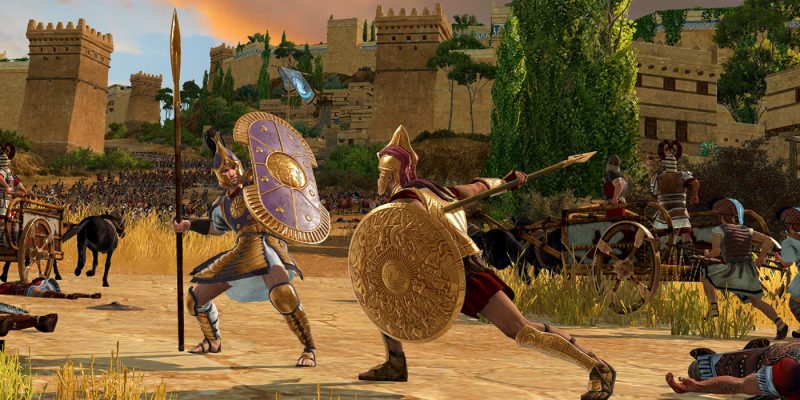 Free games are great. Free new games? Even better. Sega and Epic Games teamed up to make Creative Assembly’s latest offering in the Total War franchise free for the next 24 hours. Tomorrow, Total War Saga: Troy goes up to $49.99.

So, what’s the deal with the ‘Saga’ name? Saga games keep the gameplay Total War fans love, but focus the action on a more specific point in history. In this case, it’s the Trojan War period and the fate of the Aegean civilization.

Saga games also use modified versions of game engines that came before them. For Troy, that’s a modified version of the Total War: Warhammer 2 engine. But that doesn’t mean we won’t see features from the more recent Three Kingdoms game in Troy.

Developer Creative Assembly had this to say about diplomacy in the newest game:

“TROY’s diplomacy system builds on what we’ve learned from Total War: THREE KINGDOMS, allowing you to keep your allies sweet, your enemies in their place, and change the entire course of the Trojan war should you choose to. We’ll also be introducing plenty of new diplomatic features which are unique to TROY.”

But if you were looking for the devs to lean into direct gameplay mechanics with Greek myths, you’re going to have to keep looking. Greek gods do make an appearance, but it’s to provide more passive gameplay bonuses. For example, praying to Poseidon removes deep-sea attrition.

We do get to pick from a solid roster of heroes, though. From Achilles, Agamemnon, and Odysseus to Hector, Paris, and more. Each with unique faction bonuses and starting locations.

The critical response to Troy so far is decent. It seems the early consensus is that it’s a serviceable entry into the franchise but not the best. Serviceable is good enough for me with Epic footing the bill.

Total War Saga: Troy is available now on the PC store (free to keep for 24 hours). A Steam version is slated for release sometime in 2021.