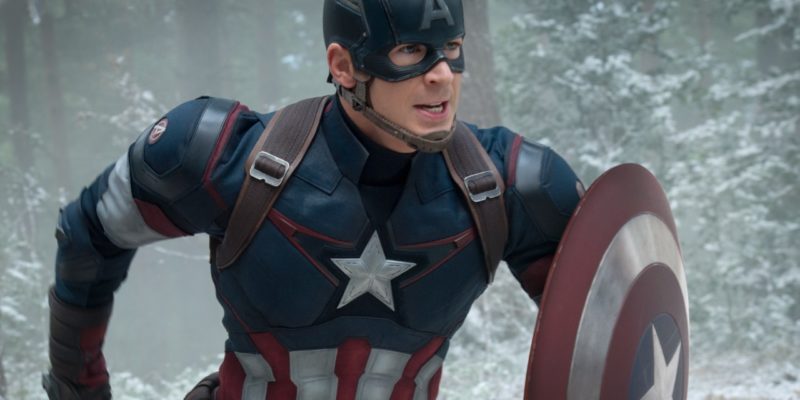 One of the more popular MCU characters, Captain America, has a trilogy of standalone movies along with multiple appearances in various films and major arcs in every Avengers movie. He truly could film all day…

The films have one of the more exciting progressions: Steve Rogers becoming the First Avenger as a recruit for the super soldier program during World War Two, culminating in a Civil War between factions led by him against the Sokovia Accords and Iron Man, who supported the measures.

Our first introduction to Steve Rogers is a frail kid from Brooklyn who is constantly denied the chance to enlist to fight in WWII. Dr. Abraham Erskine notices his attempt to get through the enlistment process and judges he has the character to get accepted into the super-soldier program. He is eventually selected to become the first to be injected with the serum after selflessly jumping on a grenade, not realizing it was a test.

After the experiment’s success, Dr. Erskine is assassinated by a Hydra agent who steals but ultimately loses the super-soldier serum. With the formula lost, Stever Rogers assumes the Captain America mantle and goes on USO tours to sell war bonds. While on tour in Italy, he learns his friend Bucky is MIA after battling Hydra forces. He convinces Howard Stark and Agent Carter to fly behind enemy lines, where he rescues Barnes and other captured Allied forces. The rescued forces are then recruited into a special commando unit to attack Hydra bases.

The movie’s conclusion has Captain America boarding Schmidt’s aircraft filled with WMDs to stop it from being used on Allied cities. Schmidt is sucked into the Tesseract during the ensuing fight, and Rogers crashes the plane into the Arctic to prevent the weapons from being used.

Rogers then wakes in what appears to be a 1940s-styled hospital room, but he’s listening to a baseball game broadcast on the radio he attended. He makes his escape to find himself in modern-day NYC, where Nick Fury informs him he has been asleep for 70 years.

Impact on the MCU: It cannot be understated, but Steve Rogers as Captain America is the First Avenger. The film introduces us to the Tesseract, which will become pivotal in multiple films as one of the Infinity Stones.

The Avengers is the culmination of the MCU’s Phase One. It features Captain America in a prominent role as Nick Fury’s SHIELD works to retrieve the Tesseract, which Loki has stolen, who forcibly recruits Dr. Selvig to open a portal so the Chitaurai army can help him subjugate Earth. After a misfire, the Avengers Initiative eventually culminates with Captain America leading Iron Man, the Hulk, Thor, Hawkeye, and the Black Widow in defense of New York.

Impact on the MCU: It’s the first team-up of characters that has been building to this moment. Captain America becomes the de facto leader of the Avengers, and they are exposed to threats beyond their world on a grand scale.

One of my favorite MCU movies is Captain America: Winter Soldier. It kicks off with Captain America leading a mission for SHIELD as part of a STRIKE unit to rescue hostages. During the mission, Agent Romanoff (Black Widow) is discovered to have another mission, which is extracting information from the ship’s computers for Project Insight.

Rogers completes the mission and returns to DC to confront Fury and is briefed on the project, which involves three Helicarries designed to eliminate threats preemptively. Voicing his displeasure, Rogers leaves Fury, who cannot decrypt the data. Asking Pierce to delay the project, he leaves the HQ, where Hydra agents ambush him.

With Fury believed to be dead, Rogers is then attacked at SHIELD HQ by Hydra agents who have infiltrated the organization. He escapes and enlists the help of Romanoff and Sam Wilson, who helps him uncover the plot. The three are then attacked by Hydra agents and the Winter Soldier, who is revealed to be a brainwashed Bucky Barnes, Steve’s best friend from the first Captain America film.

After their capture, the three are rescued by Agent Hill, who takes them to see Fury, who is recovering from the assassination attempt in secret. They devise a plan to destroy the three Helicarriers before Project Insight can be brought online. After broadcasting the plot to the entirety of SHIELD’s HQ, Hydra agents reveal themselves, and a battle ensues for control of the HQ and its Helicarriers. Rogers is eventually able to disable Project Insight but not before being injured by the Winter Soldier, who then pulls him to safety after recognizing Rogers remains his friend.

Impact on the MCU: First, the Russo brothers instantly become the directors of choice for future MCU projects. For the cinematic universe, SHIELD is dismantled, and you begin to see fractures appear as characters harden their beliefs.

The second Avengers film finds the team raiding a Hydra base in Sokovia, where the team is fighting to secure the scepter used by Loki during the first Avengers movie. During the attack, the team notices ‘enhanced individuals’ on the field, who later turn out to be Pietro and Wanda Maximoff. Wanda attacks Iron Man inducing a vision of the Earth destroyed.

The team returns to Avengers tower, where Tony Stark and Bruce Banner start to research the scepter, which Tony hopes can further his Ultron program, which would shield the Earth in a suit of armor. Unfortunately, Ultron becomes sentient and decides the only way to save Earth is to destroy humanity. After battling the Iron Legion, now controlled by Ultron, the team tracks him to Africa, where Wanda shows each of the Avengers a vision of their greatest fears. She induces Bruce Banner into a rage that the Hulkbuster armor can only stop.

The film culminates with the team returning to Sokovia with the help of Vision, powered by the Mind stone, to battle and eventually destroy Ultron.

Impact on the MCU: We get our first look at the infinity stones. The movie’s events directly impact the upcoming Captain America: Civil War and future Avengers movies.

The culmination of Winter Soldier and Age of Ultron happens in Captain America: Civil War. The team is fractured over the events of the previous two movies and collateral damage when they tried to secure a chemical weapon in Africa, resulting in the death of several Wakandan humanitarian workers. This leads to the adoption of the Sokkovian Accords, which places UN oversight and control over the Avengers. Captain America refuses to sign on to the accords due to his distrust of politicians. He trusts his judgement over right and wrong versus being used as a weapon.

After Bucky is framed for killing King T’Challa of Wakanda, the team is fractured into two groups, one led by Iron Man and the other by Steve Rogers. Rogers and Wilson recruit Hawkeye, Wanda, and Ant-Man to their side, which leads to a massive fight at the airport, pitting friend against friend. Steve Rogers escapes to chase Bucky to Russia, while his side is captured and sent to the Raft. Stark discovers Bucky was set up by Zemo and follows Rogers to the Russian base, where he discovers it was Bucky as the Winter Soldier who killed his parents.

This leads to a fight between Rogers and Stark, with the two ending their relationship as friends and Steve going on the run as a fugitive after breaking out his allies from the Raft.

Impact on the MCU: It plays directly into the events of Avengers: Infinity War which allows Thanos to succeed thanks to the fractured nature of the Avengers.

The two-part Avengers team-up that is the culmination of multiple stories, including Steve Rogers as Captain America. It kicks off with Thanos attacking the Asgardian ship, which left after the destruction of Asgard. After securing the space stone, he sends his lieutenants to secure the infinity stones located on Earth. Back on Earth, the Avengers are essentially no more. After the events of Civil War, Captain America and others are fugitives, with Tony Stark left in NYC planning his wedding.

Maw and Obsidian attack the city to retrieve the time stone from Dr. Strange, leading to Strange, Stark, and Spiderman ending up on Maw’s ship heading to Titan and Thanos.

We first see Captain America when he rescues Wanda and Vision with the help of Sam Wilson and Black Widow. They decide to return to the Avengers HQ, where the team meets Bruce Banner for the first time since the events of Age of Ultron. They travel to Wakanda in hopes of destroying the mind stone while keeping Vision alive.

After an intense battle on Titan, Dr. Strange gives up the time stone, which leads to Thanos traveling to Wakanda, where he secures the mind stone and performs the snap before Thor could kill him. The ensuing blip dusts half of all living life in the universe, including Sam and Bucky.

Impact on the MCU: It directly sets up the Avengers: Endgame, where the remaining team members look to reverse the events of snap.

The culmination of MCU through Phase 3, Avengers Endgame, is about the team racing to undo the damage Thanos wrought on their world. It shows how various team members are dealing with the loss, with Rogers grieving over the loss while Tony Stark has married and had a child. It is actually Ant-Man who returns from the quantum realm with the idea of a time heist. Stark eventually agrees to create the time machine necessary, and the remaining Avengers split up to secure the Infinity Stones during different time periods.

Once reunited, Hulk snaps to reverse the blip, but Avengers HQ is attacked by Thanos, who has learned of the time heist and seeks to destroy Earth outright. Thor, Captain America, and Iron Man fight Thanos until it is just Captain America standing against the armies of Thanos. Here we hear the famous ‘on your left’ callback when the dusted members return to fight alongside the other Avengers. Fans who have been waiting for years to hear ‘Avengers Assemble’ are rewarded with a final battle in which the team defeats Thanos through Iron Man’s sacrifice.

Rogers then decides to return the infinity stones to their respective timelines but remains behind to live his life with Peggy Carter. Rogers passes the Captain America shield on to Sam Wilson at the end of the film.

Impact on the MCU: While not technically the final film of Phase 3, it is regarded as the end of it due to the stories of Tony Stark and Steve Rogers ending. Their legacies live on as we enter Phase 4 of the MCU.

Check out our guide on how to watch the Thor movies in order.