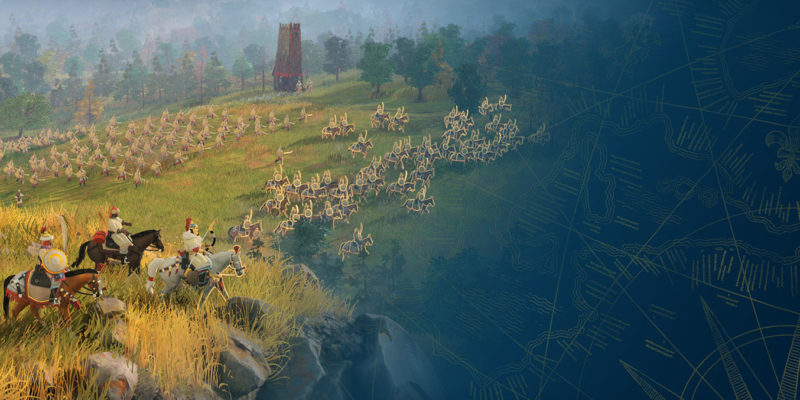 During the technical test weekend, I spent a few hours beating up on the AI and a few PvP matches. It’s a little early to declare it a great successor to Age of Empires 2, but Relic Entertainment (folks known for Company of Heroes) and World’s Edge are on the right track here. Let’s dive into what works and what needs more work.

Age of Empires IV isn’t some drastic reimagining of the franchise. That’s not to say the developers aren’t adding plenty of new gameplay mechanics, but if the last time you played Age of Empires was a decade or two ago – you’ll be right at home as your tiny village grows into an empire.

Villagers still make the backbone of your empire as you set them to collect food, wood, gold, and stone. Spearman, swordsmen, archers, and cavalry face off in the usual melees.

But you will notice tweaks to the formula right away. Advancing through ages is now done through the construction of landmarks, not the click of a button. And each new landmark comes with choices.

Take the English: Once you hit the Feudal Age, you get two choices. The Council Hall (produces Longbowmen at 100% speed from the Landmark) or Abbey of Kings (Heals all nearby friendly units that are out of combat by +4 every 1.5 seconds). With the Council Hall, you also don’t need to rush into building an Archery Range to recruit Longbowmen.

The Prelate is available from the get-go and costs 100 gold. It’s a steep early investment, but it pays off quickly. Besides healing units, the Prelate also increases villagers’ gather rate by 40%. Station one near a resource gathering building, and all the villagers get the boost. It becomes even more powerful when you advance to the Feudal Age and construct the Aachen Chapel landmark. This creates a large radius around the chapel that can affect multiple buildings with only one Prelate.

In the Castle Age, the Holy Roman Empire can build the Burgave Palace landmark that allows you to build five Barracks units at a time instead of one. This will make them incredibly formidable when counter-attacking or reinforcing a mid-game push.

The Chinese Imperial Official collects gold from nearby buildings, which gives a boost to the early-game economy.

Both offer early economic advantages at the expense of being vulnerable to an early attack. If an early attack fails to materialize or you can hold it off, the boost in resources will make the transition to mid-game much easier.

Eight civilizations will be available when the game goes live next month, and there’s going to be a lot more than just surface-level civ bonuses and a unique combat unit that makes them stand out.

I like what the Age of Empires 4 team is doing here with the different civilizations. Balance is always a worry, but it’s fun to try other civilizations that have obvious differences besides a combat unit or two. If implemented well, we could see vastly different build orders and strategies across all eight civilizations.

The presentation could use a little work

Age of Empires IV doesn’t look bad by any stretch, but don’t expect a looker either. We’re not getting the graphical fidelity of other Microsoft published games like Microsoft Flight Simulator or Gears of War. The graphics and animation are ok, but nothing that’ll make your PC flex.

UI is another area that could use some tweaking. Some more contrast between icons would be nice. Having the blue/gold color scheme makes everything blend together a little too much. This isn’t a problem once you remember the hotkeys for buildings, but on first impression, I did do a couple of double-takes to make sure I was clicking on what I wanted to.

Also, give me my resource counter at the top of the screen. Old habits die hard, and I’m used to looking up to see my resources.

And that bright yellow ribbon that shoots out of the sky when you set a waypoint feels a bit much.

Sure, demos like these help devs test servers, but they’re also here to sell us on the game. After a few hours with Age of Empires IV, I can’t wait to play more. With eight civilizations, multiple campaigns, changes to siege gameplay, and significant differences between civilizations, Age of Empires IV looks solid. It’s another no-brainer if you’re subscribed to Game Pass.

As for post-launch content? The developers are already considering new civilizations. And on the multiplayer side of things, the game will adopt the seasonal approach we see so much of these days with significant balance updates coming before the start of each season.

World Edge’s Adam Isgreen touched on how they plan to approach new content. Like most multiplayer games, the community is split into different parts. One part wants to mod, one focuses on competition, and then there’s the more casual player.

“We want to find that nice balancing act,” Isgreen tells PCGamesN. “Where we never leave anyone too long so that everyone always has something they can look forward to. Like, oh sweet, there’s a new map coming out this week, or new biome or whatever it happens to be that really satisfies the multiplayer players.”

There’s a solid, fun base here. It’ll be up to the developers to respond quickly to balance issues and serve up new content to keep the community engaged. Age of Empires IV doesn’t stray too far from the formula that made the franchise an RTS staple, but it does enough to pull this old fan back in.