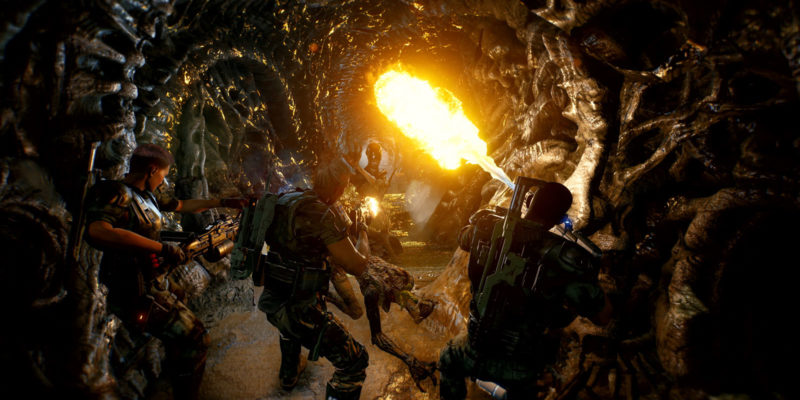 On the hunt for a new co-op shooter? Keep an eye on Aliens: Fireteam. Set for release this summer on Xbox, PlayStation, and Steam, the co-op shooter pits teams of three (or solo with AI teammates) against xenomorphs and Weyland-Yutani Synthetics.

Not too shabby looking.

According to the game’s website, the story takes place 23 years after the original Alien trilogy as you step into the boots of a colonial marine stationed aboard the USS Endeavor. Your marine unit is heading to LV-895 in the outer colonies to respond to a mysterious distress call.

The game’s Steam page dives deeper into the gameplay mechanics.

“Choose from five unique classes – Gunner, Demolisher, Technician, Doc and Recon – each with their own special abilities and character perks. Utilize an extensive arsenal of 30+ weapons and 70+ mods/attachments in your effort to eradicate the Alien threat. An innovative Perk Board modifies and improves your abilities, while a unique Challenge Card system alters the approach to each Campaign mission, offering a new experience with every playthrough.”

We’ll get our first look at gameplay on Thursday, courtesy of IGN as part of their IGN First coverage.

No word on pricing yet, either. Aliens: Fireteam looks pretty good in our first look at it, and an attractive price point would go a long way towards convincing folks to pick it up. A beta/demo would help too. We’ll get a much better look at gameplay later this week.