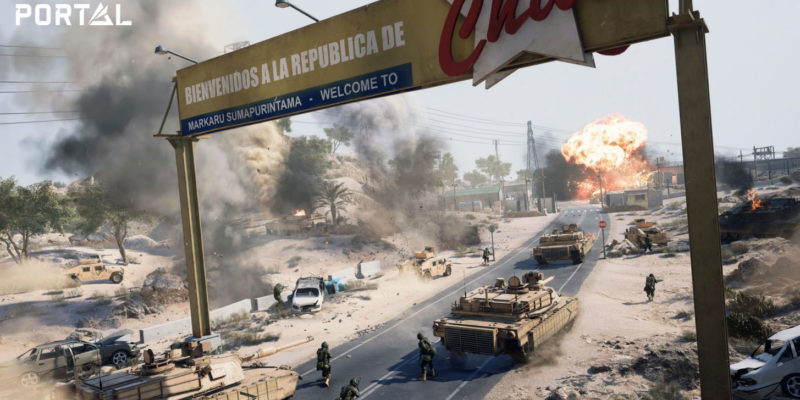 Today, DICE showed off what their partners at Ripple Effect (formerly DICE LA) have been working on. Battlefield Portal brings six classic Battlefield maps to the latest build of the Frostbite engine. And it lets you tweak damn near everything except the models. It’s not a map editor, but you can create all kinds of modes.

Want to play Battlefield with no prone, ala Bad Company 2? Battlefield Portal lets you. JackFrags put together a fantastic video going over all the different settings you can tweak.

Six classic maps are re-imagined inside of Battlefield Portal:

Battle of the Bulge (Battlefield 1942)

We’re also getting guns, vehicles, and gadgets from those three Battlefield games. Want to fly Spitfires against fighter jets? Go for it.

Destruction is also coming to the Battlefield 1942 maps.

A Logic Editor gives the community even more control over what they can create. From DICE:

While the Settings will allow you to change many specific conditions with the flick of a switch, the Logic Editor will let you define rules, victory conditions, consequences of specific in-game events (like setting a reward or punishment for a player scoring a kill), and even more to create custom game modes that aren’t possible to create with the Settings alone.”

Battlefield Portal also gets all future content. “As we add new updates to Battlefield 2042, they will be available for Battlefield Portal players and creators, giving them even more options to create the kind of the experiences they desire as the game grows,” says Senior Producer Kristoffer Bergqvist.

I want to see what all is possible with this Logic Editor. Could we create mini Battle Royale modes on these maps? Or even missions using AI bots? I’m sure we’ll see folks cook up stuff no one can even imagine yet.

Battlefield 2042 is getting an open beta in September ahead of its October 22 release date.