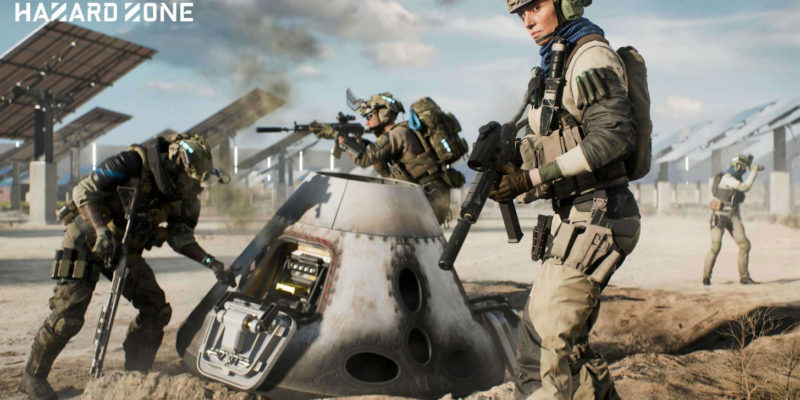 Rumors have described the game as Tarkov-like, but folks should tamper those expectations today. DICE published a blog post that dives into the lore behind Hazard Zone and different gameplay elements for the mode.

Hazard Zone’s Story – In the year 2040, a worldwide event known as The Blackout has caused over 70% of satellites in orbit to malfunction and fall into the atmosphere. Communication, navigation, and surveillance were crippled, bringing an already tenuous relationship between the US and Russia to the edge of war.

In response, both countries have begun to use satellites equipped with capsules containing radiation-hardened Data Drives to collect important intelligence throughout the world. These capsules are dropped down into US/RUS controlled territories for the Occupying Forces to secure.

Such Data Drives are essential to No-Pats around the globe, providing them with valuable information to keep all No-Pats (including non-combatants) safe. And when necessary, the information can be sold to the Dark Market in return for supplies needed for survival.

DICE also touched on what happens if you don’t have any DMC to spend. Every specialist comes equipped with a basic Assault Rifle with zero attachments.

As for the tactical upgrades? There are 15 coming at launch. DICE describes one that gives you an extra throwable gadget. Another reimburses 25% of upgrades and loadout if you die.

How does Hazard Zone work? At the start of a match, you’ll use a scanner to sweep across the map, looking for Data Drives. The goal is to reach the downed satellite capsules, collect the data drives, and extract them.

The more data drives you extract, the more DMC you’ll earn. You’ll also get bonuses for things you do during each match, such as kills. And if you successfully extract several times in a row, you’ll enjoy reduced costs for your loadouts.

Here are a few more details about Hazard Zone:

– Matches last between 5-20 minutes, depending on your playstyle.

– Squads are made up of four unique specialists (there are 10 to choose from at launch).

– A respawn mechanic tied to a Redeploy Uplink (in-map) or a Squad Redeploy Call-in (bought with DMCs pre-match).

It would have been nice to get a meaty trailer showing off all the details we end up reading from a blog post. The short, flashy trailer looks nice – but lacks the substance needed to highlight precisely what Hazard Zone is and how it plays.

An extended trailer showing every aspect of Hazard Zone would do a hell of a lot better job selling it than a sub-two-minute trailer with barely any gameplay.

How much DMC do weapons/equipment cost? Are there a lot of AI enemies patrolling the map? Do they use tanks? How exactly does the respawn mechanic work? Are the mechanics of the mode compelling? All these questions could be answered with a 5-10 minute long trailer actually showing the mode.

We’re already playing games like Apex Legends, Warzone, Escape From Tarkov, and Hunt: Showdown. DICE should give us a more in-depth look at how Hazard Zone plans to stand out from these games.

The concept sounds intriguing. But we’ll probably have to wait until launch to see much more of it. Battlefield 2042 is coming to consoles and PC on November 19.