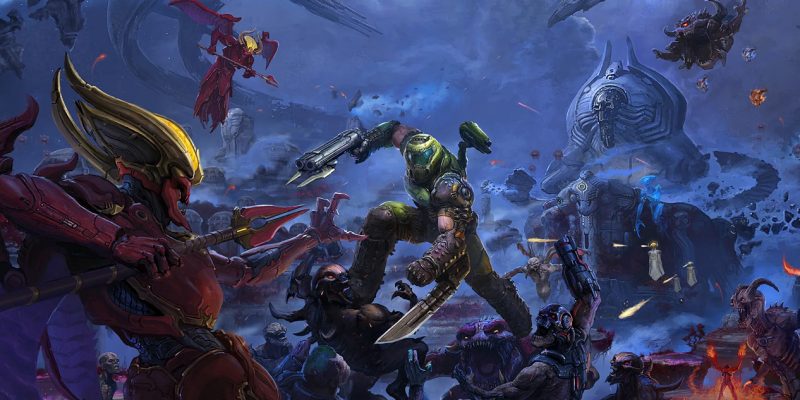 One of the highlights of Gamescom’s Opening Night Live was our first look at DOOM Eternal’s expansion: The Ancient Gods, Part One. It looked like more of the awesome demon blasting fun we’ve been enjoying since 2016. Even better, you don’t need DOOM Eternal to play it. If you skipped out on DOOM Eternal earlier this year, you can still rip and tear your way through the upcoming DLC.

This piece of info comes from a recent article from PCGamesN. They chatted with id Software executive producer Marty Stratton about the expansion. Stratton explained that The Ancient Gods is actually a standalone expansion.

“It’s important as we want the DLC to reach as many people as possible. In fact, you don’t even need to own Doom Eternal to buy the DLC and play it,” says Stratton.

It also makes sense that the standalone DLC would be on the bigger side. Stratton says the team is “very proud of the scope of the DLC.”

The Ancient Ones will ultimately be a two-part expansion. Part One hits on October 20 and can be bought separately, and is also part of the Year One pass for DOOM Eternal. As for The Ancient Gods Part Two? Two expansions were part of the deal with the Year One pass. And, DOOM Eternal launched in March. So, before March 20, 2021 is a solid bet barring any development issues.

PCGamesN’s full interview with Stratton is also worth a read. In it, he touches on why the team focused on campaign DLC. Hint: The campaign is the good part of DOOM, not multiplayer.

“It’s what people wanted. We did a season pass for Doom 2016 that was based on multiplayer content. And, I think it was a pretty loud and clear from fans that they would have much rather had campaign content. And justifiably so. I mean, the campaign is the star of the show.”

No lies detected there. It sucks, but there’s not a big appetite for arena shooters anymore. Battle Mode was a fun distraction, but Stratton is absolutely correct in describing the campaign as the star of the show. There’s no easy answer for what id Software should do with multiplayer.

Thankfully, the campaign more than delivers. Let’s cross our fingers The Ancient Gods does too.