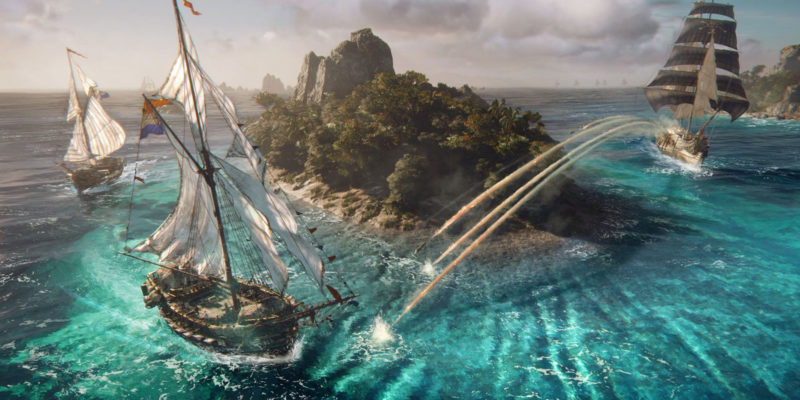 It’s E3 2017. The show is still a big deal and opens to the public with 68,000+ attendees checking out the latest the gaming industry has to offer. And during Ubisoft’s press conference, they announce Skull and Bones – a pirate-focused naval combat game that looks to expand on the ship combat introduced in 2013’s Assassin’s Creed Black Flag.

Five years later, we still haven’t seen much from Skull and Bones. But that looks like it’s about to change. A recent report from Try Hard Guides says a re-reveal is coming next month. From the report:

“Sources have said that Ubisoft is preparing to re-reveal Skull and Bones during the week of July 4th. Details on what will be revealed are vague, but it’s understood that Ubisoft will finally confirm a release date for the long-awaited title, officially reveal gameplay, and share some other additional details.”

This report is backed up by several rating agencies posting ratings for it. Agencies in South Korea, Brazil, and now the U.S. have rated the game.

Here’s the ESRB Rating (Mature) summary, which gives a brief overview of what we can expect from the game.

This is a naval-combat action game in which players assume the role of a shipwrecked outcast on a journey to become a pirate captain. As players take on missions, they can explore settlements and engage in dramatic sea battles. From a first-person perspective, players command their crew to shoot cannons at rivals (e.g., warships, merchant ships, settlements/forts) in attempts to obtain loot/goods. Enemy ships can be rammed and boarded, resulting in brief cutscenes of crew members shooting or slashing at each other. Combat is highlighted by gunfire/cannon fire, explosions, and blood-splatter effects. Some territories depict corpses impaled on spikes or hanging from nooses; beaches may depict corpses and large bloodstains in the aftermath of battle. Settlements occasionally contain brothels and prostitutes that call out to players when approached (e.g., “Come spend your coin all over me”; “The price of my a*se goes up tomorrow, so buy a piece today!”). Players can also engage in quests to bring poppies to opium dens, which are depicted with patrons lying on couches smoking pipes. The words “f**k” and “sh*te” appear in the dialogue.

Based on the summary, it sounds like we aren’t getting something like Sea of Thieves when it comes to ship and on-foot combat/exploration. Most (if not all) of the combat occurs from the ship’s perspective, according to the summary.

If the above report is correct, we should see a big reveal of Skull and Bones sometime in July. Hopefully, we get a good look at what all the gameplay has to offer.

As for a release date? Ubisoft has previously stated Skull and Bones is coming in the second half of their fiscal year. That would put it somewhere between October 2022 and March 2023. Look for that release window to narrow during next month’s reveal.