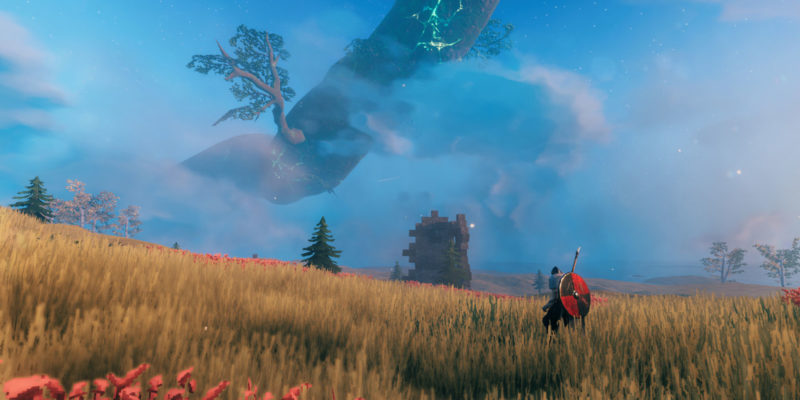 The newest Steam hit, Valheim, isn’t slowing down. I finally dove into Iron Gate’s take on the survival genre along with more than 500,000 concurrent players. It reminds me of 7 Days to Die. Except instead of a post-apocalyptic wasteland stuffed with zombies, Valheim takes us to a Viking-inspired purgatory as we give Odin a hand in taking out larger-than-life mythical beasts.

And that’s what helps Valheim stand out. The more popular survival games like Rust and DayZ use PvP as the main gameplay hook. Valheim instead focuses on PvE. And I’m sure that’s played a significant role in its surging popularity. I’ve poured hundreds of hours into DayZ but losing a fully geared character, hell any character is gut-wrenching. Valheim’s world isn’t forgiving either (even a falling tree can kill you), but the focus on co-op means any death won’t set you back too much.

When I landed on my procedurally generated world, a raven companion offered me my first hint. Start hitting and gathering stuff, and my character will remember the rest. After a couple of swings on a small tree, I gathered up a few pieces of wood and learned a handful of recipes. I picked up a piece of stone, and I had what I needed to make my first ax. The more stuff I grabbed, the more Valheim’s crafting system opened up.

Within the first hour, I had a small camp set up built, a set of armor that probably wouldn’t stop much, and an ax and bow. After that, it was off to the first boss – Eikthyr. It’s a super-sized deer that shoots bolts of electricity out of its antlers. But it’s also pretty easy to take out with a bow.

Valheim makes a fantastic first impression. The co-op focus is a nice change of pace from my usual gaming habits of Warzone, DayZ, Apex Legends, and the like. It can be played solo, but it’s best to grab a friend or nine.

And while the Viking setting isn’t exactly new, it is for the survival genre. A genre that goes for the zombie/post-apocalyptic setting more often than not.

With this weekend’s rush of new players, Valheim eclipsed the highest concurrent numbers of huge games like Terraria, Fallout 4, Life is Strange 2, and Among Us. Next up is Cyberpunk 2077’s highest peak players of 830,387. Valheim might not be slowing down, but it’s going to have to keep the momentum going for a while to hit that number.

While Valheim launched in early access, it’s fairly polished for this type of game. Don’t let that label scare you off. But if you are waiting for it to exit early access, the devs say that won’t happen for at least a year.

By Alex Chavers13 hours ago