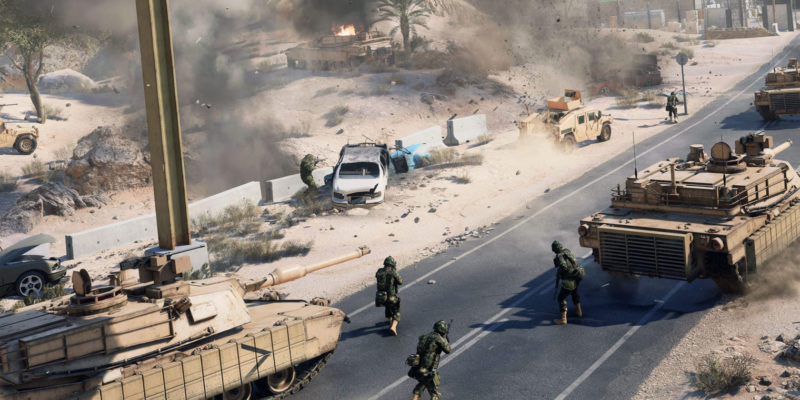 When you fire up Battlefield 2042’s open beta over the next few days, don’t expect it to be completely polished. According to DICE, the open beta build split from the full release client a few months ago. And while it has been improved to give us a good idea of what to expect on launch day, it’s not the same build the devs continue working on today.

Minor visual, performance, and graphical issues: Many of the issues you encounter throughout the Beta have already received a great deal of new attention, and will continue to do so as we complete the final work on 2042.

Cross Play parties: During the Open Beta, you will not be able to squad up with players on different platforms, but you will encounter players from other platforms. We’re making great progress on our plans to have this feature fully available at launch, and we’ll keep you updated on our progress towards that goal.

Adaptive Triggers – PlayStation 5: You will not experience the full range of supporting functionality for PlayStation 5 controllers during this Open Beta, that is otherwise presently being developed and tested for possible inclusion later down the road.

Commorose: Battlefield Veterans will be familiar with this staple of the gameplay experience. In the Open Beta, you’ll be able to play with our Ping feature, and use the Right Shoulder button, or Q on PC, to ping locations, and enemy targets, with supporting VO that helps to reference to your Squad what’s being highlighted. If all goes well, we’ll look to show you the complete Commorose that otherwise didn’t make this build. Look forward to seeing that soon!

HDR mode on PC: We’ve disabled this feature on PC for the Open Beta. We observed that it was causing issues that we weren’t happy with. Console players will otherwise find options for this in the Video Settings, and we’re tracking positively against restoring this on PC ahead of time for the full release.

VOIP: VOIP is disabled in the Open Beta. We’re working to have this available in the full release, including for Players who are squadding up Cross Platform.

Sustained EMP Effect: There are very specific, and rare circumstances in which players can find that the visual effect associated with the EMP Blast will persist after death, and can last through the remainder of the round. We’re confident that we’ve addressed the underlying issues that caused this to take place in our full release testing, but during the Open Beta if you run into this rare issue, please just leave the server and rejoin so that you can get back to experiencing our gameplay.

Those are some of the more obvious issues DICE addressed. Most should be (or already are) fixed by the time Battlefield 2042 officially releases on November 19, 2021.

Battlefield vets know the franchise isn’t exactly known for smooth launches, so I wouldn’t expect this to be an exhaustive list. Still, it’s good to see DICE is on top of these issues.

I wouldn’t stress if performance isn’t perfect over the next few days. Performance optimization is often one of the final parts of development ahead of a game’s launch.

Just give me those epic Battlefield moments from the Battlefield 4 days, and I’ll be happy.