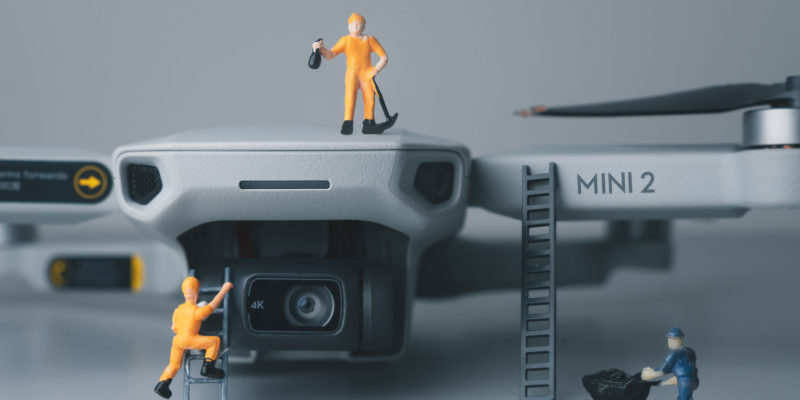 Across the landscape of the best drones for sale, it’s DJI’s world and then everyone else. Sure, we can talk about the custom FPV camera drones with RED cameras attached, but for your off-the-shelf drone you can use out of the box, the titan of the industry remains DJI. Autel has closed the gap in recent years, but 2022 is shaping up like in previous years. DJI rules the market.

One issue among drone enthusiasts is the lack of choice. New product releases have slowed to a crawl, and prices have shot up for flagship drones. That can be attributed to supply chain issues plaguing nearly every industry, but it’s doubtful we will see prices normalize when the issues are ironed out.

Want to skip ahead to the best drone for sale in 2022? Who wants to read a short novel when there’s content to be made. We are taking a different route and eschewing the flagship for pure value. 2022 is the year of the DJI Air 2S. Everything you loved about the Mavic 2 Pro, but better and slightly cheaper. Take that inflation.

Before the arrival of inexpensive, off-the-shelf camera drones, aerial photography and videography involved strapping into a helicopter and hanging outside the door with a camera.

Not sure how I feel about trusting a harness that’s probably seen better days and dangling out of a helicopter. They don’t make anti-anxiety pills that large, and then there’s the cost. Renting a helicopter for a video or photography session isn’t cheap.

The solution? Slap a camera on a drone, and you’re in business. I don’t have to endure a panic attack hanging outside of a helicopter, and who among us hasn’t played video games? Put those skills to use and get the perfect shot or footage.

For me, that includes dropping a Phantom between two cliff faces to get an amazing waterfall shot. Multiple storm chasing shots and video. Chasing my nephew through the woods. A tree won that particular battle but showed DJI drones could take a beating and come out on top.

Need some help with the editing process? Here’s our constantly updated list of the best YouTube channels for all things post-production.

Our pick for 2022 is the DJI Air 2S. It doesn’t break the bank and improves on Mavic 2 Pro in every metric. Price? Technically it’s sub $1000, but $1249 will have you flying with plenty of batteries and extra props.

On the camera side, the one-inch sensor found on the Mavic 2 Pro makes an appearance giving you 20MP stills and 4K60p video. It’ll oversample to 5.2k if you need the extra detail. Four-direction obstacle avoidance keeps you out of trouble, which you will need thanks to the 12km range.

Battery life keeps you in the air for around 30 minutes in perfect conditions. I’ve never found these mythical ideal conditions, so in the neighborhood of 25-27 minutes is a safe bet depending on how fast you’re pushing the camera drone.

Spec readouts are all fine and good, but how about some examples of the content you’ll be able to create. Here’s a 5K cinematic graded video shot on the drone. The 10-bit Dlog shines:

That’s a sub $1000 drone. Sure, you need a little skill in post-processing, but Youtube is your friend when it comes to color grading.

Want to see the raw footage side-by-side with the graded final product? Moment takes us through LA with the Mavic Air 2S:

That was definitely during the pandemic because traffic is never that light in those areas. Trust me.

At a starting cost of $999, the Mavic Air 2S is hard to beat. Sure, the Mavic 3 throws the kitchen sink of features at you, but the videos above demonstrate just how versatile the camera drone is without breaking the bank.

DJI’s latest flagship is what makes gearheads salivate. We want the latest tech, and the company delivered. Gone is the one-inch sensor in favor of a Micro 4/3 Hasselblad system. It’s still at 20MP, but that’s a plus considering the one-inch sensors could be plagued with soft edges.

Another plus in the Mavic 3 column is the adjustable aperture. It’s the first in the Mavic series to offer it, and it’s about damn time. Dynamic range is getting up there with full-frame mirrorless cameras coming in at 12.8 stops. The onboard Hasselblad color science is an excellent addition and pushes the Mavic 3 well into the prosumer, if not professional category.

The safety features on the Mavic 3 are at the bleeding edge of drone technology with smart RTH, omnidirectional obstacle avoidance, and APAS 5.0.

Battery life has you in the air for up to 46 minutes, and the OcuSync 3.0 extends the range to 15km.

The Mavic 3 has a two-camera system vertically stacked if one camera wasn’t enough. The top camera is a hybrid 28x zoom camera to help plan shots to take advantage of the 15km range.

Where’s the but? The price. The base drone costs $2200, with the FlyMore Combo at $3000. The Cine model with access to Apple ProRes and an onboard 1TB SSD will set you back $5000. Yeah, that price tag stings. Is it an incredible camera drone? Yes. Does it offer enough value? If this is your livelihood, then absolutely. If not, there’s a reason our top drone for sale is the Mavic Air 2S.

Digital Camera World remarks on the hefty price hike and how the Air 2S is the Mavic 2 Pro’s spiritual successor. “The pricing feels steep compared to the Mavic 2 Zoom and Mavic 2 Pro, but it seems clear that the Air 2S ‘replaces’ that while this machine sits slightly nearer the Inspire 2.”

T3 on who the Mavic 3 is meant for. “This is the ultimate compact drone for wealthy amateurs, pro videographers, and landscape aerial photographers.”

Mavic 3 is in its Own Class

With the professional-grade camera, exactly what type of shots are you achieving with DJI’s latest flagship? It’s stunning.

It probably helps if you have the talent of Denis Barbas, but damn, the footage out of the Mavic 3 is incredible.

Another well-done cinematic video that shows off the power of the Mavic 3. When you get to these price points, it’s all about features that help your workflow. The Mavic 3 does that, and it’s how it can justify the price.

You’ll want to get your feet wet with an easier-to-fly camera drone, but no one can deny how mainstream FPV drones have become in the past couple of years. Stabilization technology in action cameras like the GoPro and DJI Osmo Action has created the necessary camera tech for the crazy films we see today.

DJI has hopped on the FPV bandwagon with its FPV system, including the drone, V2 of the company’s digital FPV goggles, and a suite of controllers. Pilots have stepped up to develop 3D-printed mounts for action cameras to capture the most electrifying footage you’ll see on social media.

Pricing is reasonable, too, with the FPV combo at $1299. That includes everything you need to get in the air. Opt for a late model GoPro or Osmo Action for the best quality if you want better footage.

The Verge mentions preference of camera types. “You can’t go wrong with the DJI FPV. Whether you like it or not, it will largely depend on your preference — do you like mounting a GoPro instead of the built-in DJI camera.”

Luckily there’s an entire community of pilots out there who have figured out how to have the best of both worlds with action camera mounts on top of the FPV system.

T3 sides with us in that the FPV system is a hell of a ride. “The DJI FPV drone is a sensational introduction to the thrills and spills of immersive first-person view flight.”

Why buy an FPV drone unless you’re going to partake in something crazy and potentially crash your $1000+ drone?

Yeah, you’re not doing that with a Mavic. For those who don’t suffer from vertigo, you can also pull off footage like this:

Skydio is the first drone on the list that DJI does not make. The upstart company is making waves with its Skydio 2+, which builds on its predecessor with an improved camera and battery life. What makes the camera drone unique is the reliance on AI to capture shots. You’re not going to need a pilot to capture your action sports moment.

Powered by a host of Nvidia processors, it can capture a wide range of shots and has the best active tracking in the business. Pair it with the beacon, and you can land that trick with the footage to back it up. If you have a particular use case, the Skydio easily outstrips its DJI counterparts. The issue is those are narrow, making Skydio more of a niche product. Incredible technology, but lacking in terms of sheer camera performance.

Pricing is competitive with DJI, starting at $1000 with upgrades adding $500+ depending on if you want the sports package up to the pro package, which includes two years of Skydio Care.

If there’s a true DJI competitor out in the wild, it’s Autel. The company has made many strides to get a flagship comparable to the top-tier DJI Mavics. Is it there? Not quite, but the differences are becoming semantic in a hurry. Sure, it may not have the range of a flagship DJI, but flying 15km away runs into all sorts of FAA issues. The 5km range is more than enough.

The EVO II Pro has a one-inch sensor capable of 20MP stills along with 6K video. That’s a battery killer, so having 4K60p is what most of us want, and it’s standard. All the obstacle avoidance technology found in drones of this caliber is there, along with smart shots to give you that cinematic look with a push of a button.

What holds the EVO II Pro back is the price. At $1700, it’s priced well above the Mavic Air 2S, which is its competition. The Mavic 3 is leaps ahead of the current-gen EVO, leaving it in a weird area of exactly which DJI drone it’s competing against.

The ability to shoot 6K video with 10-0bit color lends itself well to incredible YouTube videos.

To say the past two years have been weird would be an understatement. The whole world shut down, opened, and is now in this odd flux of everything that seems ready to break. Supply chains are snarled with normalization not expected until late 2022 or 2023. Where does that leave new product announcements?

We don’t know. There are rumors of a new DJI Inspire 3 landing in September, but that’s niche enough to avoid supply issues. What about a new Phantom, EVO, or Mavic series? History says yes, but the current climate puts a massive question mark on even if there are announcements, will there be products available to buy?

Here’s hoping our list of the best drones for sale returns to its former glory of 2019 when there were options for everyone.

Don’t forget to check out our latest buying guides on mirrorless cameras, the best vlog cameras, DSLRs, and travel cameras.