For all the handwringing over whether the Game of Thrones universe was dead after the disaster that was season 8, it only took a dragon flying over King’s Landing to have me hooked back into the world of Westeros. Nothing like an outsized budget to bring fans in and wanting for more.

HBO and the showrunners of the House of the Dragon went out of their way to remind viewers that the prequel series would not have any crossovers from the original GoT cast. The show takes place over 150 years before the Mad King’s events and Daenerys’s rise. Having said that, the initial title card made sure to mention Daenerys prominently to connect the two worlds. Gotta make sure fans know they are still in the same universe.

The show takes place during the height of the Targaryen rule, but as you see throughout the episode, the beginning of the schism that would lead to civil war is there. King Viserys is a weak ruler, torn between his small council and his loyalty to his brother, Daemon, played by Matt Smith.

Most of the initial episode sets up the new characters. It focuses heavily on the potential for a new heir being born during a tournament meant to honor the potential male Targaryen heir from Viserys.

While there was speculation there would be less gore and sex in the prequel series, the showrunners and HBO didn’t get that memo. The tournament was filled with violence that harkened back to the original Game of Thrones. As for sex? Daemon visits brothels about as much as Tyrion would over 150 years later.

As for violence, the birthing scene teeters on the edge of being gratuitous violence. The showrunners want to show that the value of a woman’s life is essentially zero in Westeros instead of giving the King a male heir. Viserys chooses to have the baby delivered by a medieval c-section which kills the mother but gives Viserys a male heir. For a day. The show cuts to Dragonstone, where there is a funeral pyre with his wife and his newborn son.

This leads to the arguments over succession, with the small council split between Daemon and Rhaenyra being debated. Otto Hightower, the hand of the King, puts forward Viserys daughter, while others back Daemon if a bit reluctantly due to his cruel nature.

However, it is Daemon’s behavior that ends up deciding the heir. When he referred to Viserys dead son as the heir for a day, he sealed his fate, leading to an argument between the brothers in the throne room, where he is eventually ordered back to the Vale.

Rhaenyra is summoned to the crypt, where Viserys informs her she will be the heir to the iron throne and tells her the secret passed down by kings of what we now know is the threat of the white walkers. Yeah, it’s a shame we know how the story ends because the revelation would have been more impactful if we didn’t have one of the worst GoT episodes concluding this prophecy. Damn the old showrunners.

The first episode ends with Rhaenyra accepting the pledges (we will use that loosely) to her upcoming reign from houses like Stark and Baratheon.

The Good: The introduction of new characters was done in a way that didn’t bog the show down. HBO was setting the table for what will become a Targaryen civil war.

Dragons. We had to wait years for GoT to give us full-sized dragons. House of the Dragon wasted no time with a Kings Landing flyby. Gotta love the budget increases. Introducing the dragon keepers was a nice touch.

Costumes. Go ahead and hand them the Emmy for costume design., From the cloaks to Daemon’s armor. Everything was on point.

Details. The lore of the iron throne was that Maegor intentionally designed it to be uncomfortable and would cut those not deemed worthy. Daemon sat in it with no issues, but you can see his proclamation that Viserys was weak is borne out by the wounds he has suffered seated on the throne.

The Bad. The birthing scene was a bit much. I get what the showrunners were looking to accomplish, but it got to be an uncomfortable watch extremely fast for a scene that was drawn out.

Are we stuck in King’s Landing? This will probably be rectified in future episodes, but Westeros is huge. I want to see more and possibly locales we never saw in the original series. We shall see if future episodes stretch beyond the walls. 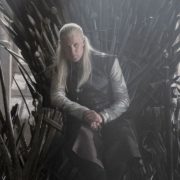 House of the Dragon Episode 1

A solid start to the Game of Throne prequel series. If all episodes are as good, we have a definite winner on our hands.
8.5
Marcus Chavers
Gear. TV. Movies. Lifestyle. Photography. Yeah, I’m the type who sees a shiny object and is immediately captivated. Wait... There’s another. You can reach me at marcus@newsledge.com