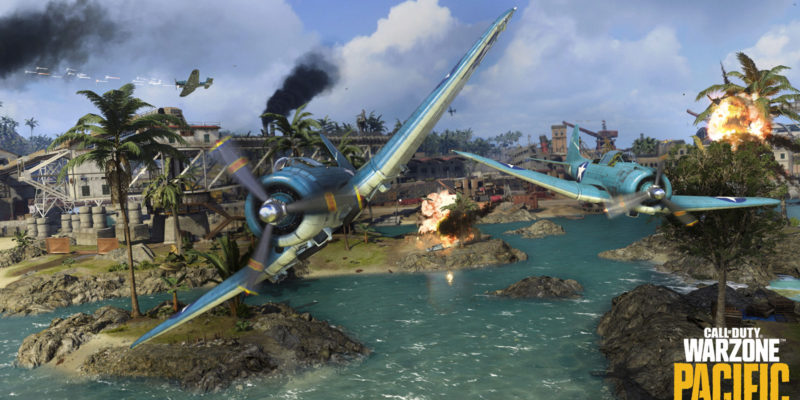 Thanks to Activision’s special ‘World Premiere’ event yesterday, we’re getting our first look at the Pacific-themed Caldera map. The image below comes from Activision CCO Pelle Sjoenell, who snapped a picture of limited jackets given away at the event which featured the map.

We see several points of interest, including:

There’s one more in the top right, but it appears to be blocked by the jacket.

Warzone is gearing up for a busy month with events leading up to the December 2 release of Caldera. Starting on November 18, Operation: Flashback kicks off as players enjoy the past 18 months of Verdansk. On November 24, Secrets of the Pacific kicks off as players learn more about the map via Warzone challenges.

The official last days of Verdansk are set for November 30 and December 1 with the Last Hours of Verdansk event. The developers promise an explosive end to Verdansk as Warzone shifts to Caldera. And the first cinematic trailer above does an excellent job of linking the old map with the new one.

The next few months are going to be fun to watch. Call of Duty and Warzone are getting some much-needed competition with Battlefield 2042 and Halo: Infinite. Plus, Activision has to be feeling pretty damn confident about this new map. Sure, Verdansk might be getting stale – but it’s a great Battle Royale map. Getting rid of it for a whole new map is a gutsy decision.

Call of Duty: Vanguard is coming tomorrow, with the new map set for a December 2 release if you buy Vanguard (December 3 for everyone else).