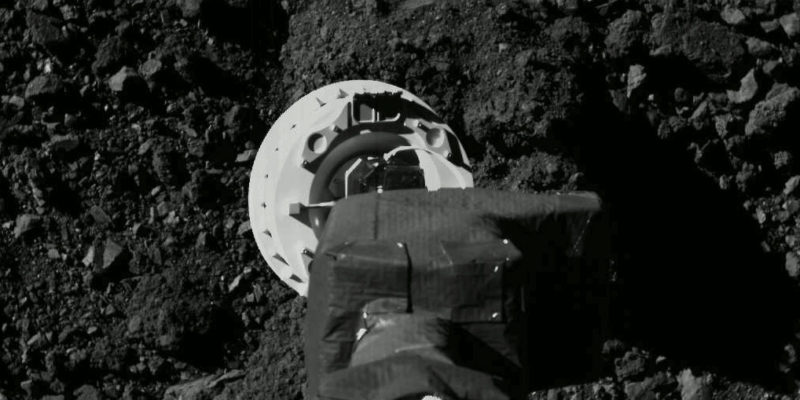 More than 200 million miles away from Earth, the asteroid Beenu received a brief visitor yesterday. NASA’s OSIRIS-REx spacecraft touched the asteroid in an attempt to retrieve a sample. The space agency confirmed a successful touch of Beenu yesterday. Later today, we should know if the spacecraft’s sampling arm managed to grab some dust and pebbles from the surface.

10/23 Update: The OSIRIS-REx mission team have confirmed the spacecraft’s TAG maneuver grabbed more than the 60 grams it needed to. The GIF below, shows the sampler head at the end of the spacecraft’s arm full of bits of Bennu.

Yesterday at 1:50 PM EDT, OSIRIS-REx fired its thrusters towards Bennu to perform the TAG (touch-and-go) maneuver. About four hours and a couple of more thruster burns later, the spacecraft’s arm reached for one of the few clear spots on the asteroid’s surface.

“Today’s TAG maneuver was historic,” said Lori Glaze, Planetary Science Division director at NASA Headquarters in Washington. “The fact that we safely and successfully touched the surface of Bennu, in addition to all the other milestones this mission has already achieved, is a testament to the living spirit of exploration that continues to uncover the secrets of the solar system.”

Here’s an animation of what yesterday’s sample gathering attempt looks like.

But did the sampling arm grab any material? According to NASA, it’ll take about a week to confirm, but we should have a good idea later today.

“Our first indication of whether we were successful in collecting a sample will come on October 21 when we downlink the back-away movie from the spacecraft,” said OSIRIS-REx deputy project manager Michael Moreau said. “If TAG made a significant disturbance of the surface, we likely collected a lot of material.”

A camera onboard the spacecraft, called SamCam, could also help the team figure out how much of Bennu they managed to grab. How much dust around the sample collector head, and inside it, could give the team a decent idea of the sample size.

The OSIRIS-REx team isn’t counting on photographic evidence alone. A few days after looking at the SamCam images, they’ll slowly spin the spacecraft with the sampling arm extended to see if there are any changes to the arm’s mass at the collection point. They did this same maneuver before touching Bennu, so they should detect whether or not they have the 60 grams of Bennu they hope they do.

In March 2021, OSIRIS-REx will bid Bennu farewell and begin its more than two-year journey back home. Touchdown in a desert in western Utah is scheduled for September 23, 2023.

NASA plans to preserve at least 75% of the sample at NASA’s Johnson Space Flight Center in Houston, so scientists across the world can examine a piece of our solar system’s ancient past.